It will set a big precedent as to how the Congress and BJP fight polls from now on.

The hurly burly in Karnataka is done, the battle is lost and won. In a late discovery of the virtues of acceptance, BJP chief minister BS Yeddyurappa resigned on May 19, just before his party was to take the floor test in the Assembly, which it never had the numbers to win.

However, this is by no means the end of the story – in fact, it is just the beginning. The Karnataka battle has officially marked the beginning of the 2019 war, the contest for the Lok Sabha elections has come alive and exciting. On your mark: The contest for the Lok Sabha elections has come alive and exciting. Photo: PTI

The three years since the 2014 general elections had seen a steady spread of saffron — state after state fell to the seemingly invincible Narendra Modi-Amit Shah combination, as a listless Opposition stirred feebly and ineffectively.

The Bihar Assembly election in 2015 did jolt the BJP, but the star of that show was the regional satrap Lalu Yadav, and the popular CM Nitish Kumar, who once had ambitions of leading an anti-Modi front nationally, later joined hands with the BJP.

The principal Opposition party, the Congress, first showed signs of life in Gujarat in 2017, where it gave the BJP a tough fight in the PM’s home state. Now, in Karnataka in 2018, the Grand Old Party has finally shown that the fight has not gone out of it, and it can still combat the BJP, move for move.

The Karnataka election was never about the state alone, it was muscle-flexing, a floor test of political might for all parties concerned. The way the battle was fought, and its result, has thrown up important pointers for 2019. 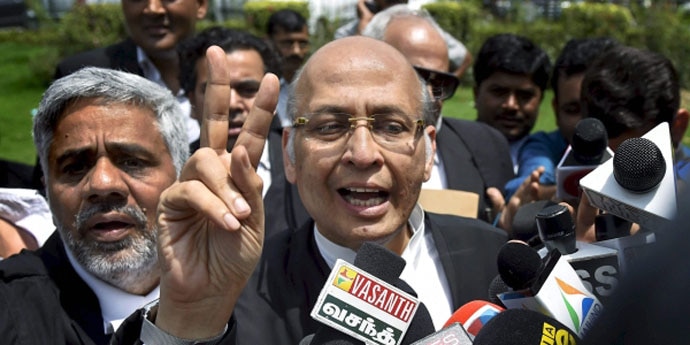 The Karnataka battle was won in the Supreme Court, with Abhishek Manu Singhvi leading the charge. Photo: PTI

The tussle has thrown into sharp focus the BJP's and the Congress’ style of fighting. The BJP is the undisputed leader on the ground, in terms of cadre and masterful campaigning. The Congress has tried to combat it by rallying institutional mechanisms – the Constitution, the Supreme Court – which the BJP distrusts and tries to subvert.

Both are important elements in a democracy. However, elections at the end should be about winning over voters. Not about stagecraft versus statecraft.

Karnataka, after Bihar and the UP by-polls, has shown that the role of regional parties cannot be ignored. They have ground-level cadre, an understanding of local issues, a better grip on the identity calculations.

If it wishes to taste more victories, the Congress needs to shed its pretensions of being the main Opposition party and be ready to play the bit role where required. King and king-maker: HD Kumaraswamy of the JD(S) will get the CM's chair thanks to the efforts of the Congress' DK Shivakumar. Photo: PTI

The BJP, much though it likes to fight as the lone wolf, needs to remember that pebbles and not rocks trip the grandest of chariots.

While the continued relevance of regional parties is great news for a plural society like India, coalitions should not come down to identity collectives. Parties need to unite on ideology and manifesto, not caste community calculations.

Religious polarisation versus caste polarisation will only mean more fragmentation, and take the discourse further away from issues of development and welfare.

The Karnataka fight was clearly between two political camps, with the voter left entirely out of the equation.

The aftermath of the vote counting saw hectic activity, most of it improper and immoral, if not out-rightly illegal. All of it was hailed as great strategy, “Chanakya neeti”. Dirty tricks have always been part of political games. As we move towards a highly charged, high-stakes general elections, parties will become more desperate.

But underhand means need to be called just that. They should not be normalised, and even celebrated, as we saw in Karnataka.

BJP, learn grace in victory, and in defeat

Karnataka saw the BJP’s strongman style of winning elections played out to its limit. The saffron party loves brawn, and flaunts it. It is a sour loser, and cannot hide it. While Yeddyurappa, like Atal Bihari Vajpayee in 1996, tried to turn his resignation into an emotional moment, the BJP has moved far away from Vajpayee’s statesmanship. Photo: Twitter

In Karnataka, it did not even try to pretend at fair play. Vajubhai Vala, and old BJP hand but holding the apolitical office of governor, took three brazen decisions in two days – inviting the single largest party, the BJP, to form a government when it was clearly short of a majority and the Opposition was clearly not, nominating an Anglo-Indian MLA, and appointing a pro-tem speaker. MLAs were lost and found, audio clips of BJP purportedly trying to bribe Congress legislators were floating around till May 19 afternoon.

While Yeddyurappa did try to turn his resignation into an emotional moment, like Atal Bihari Vajpayee had in 1996, the BJP has moved far away from Vajpayee’s statesmanship.

For one state, the party was willing to throw away its avowed position of being an anti-corruption party, make very obvious its disregard for institutions. This is dangerous for the BJP, and even more so for the democracy it rules with a massive mandate.

One undisputed silver lining of the Karnataka story is that the strength of the Indian democracy lies in its robust institutions, and not in political parties or leaders. The Supreme Court, by hearing the Congress-JD(S) appeal post-midnight, by not stopping the swearing-in, but ordering a quick floor test, by not interfering with the appointment of the pro-tem speaker, rose above politics and upheld democracy.

The saga shows how no political party will ever become greater than India’s democracy, and there will always be checks and balances in place.

The Karnataka battle saw all the players involved pull out all their weapons. While it has well and truly blown the bugle for 2019, it has also given out warning bells. All political parties, and voters, have much to watch and learn.

Post your comment
#Congress, #BJP, #2019 general elections, #Karnataka
The views and opinions expressed in this article are those of the authors and do not necessarily reflect the official policy or position of DailyO.in or the India Today Group. The writers are solely responsible for any claims arising out of the contents of this article.