SC wants Parliament to enact anti-lynching law. But will that be enough?

In a landmark judgment, the Supreme Court on July 17, while condemning the recent spate of lynchings, recommended that the Parliament enact a law to effectively deal with mob violence and cow vigilantism.

Mincing no words, the bench, headed by Chief Justice Dipak Misra, said that "horrendous acts of mobocracy" cannot be allowed to become a new norm in the country. 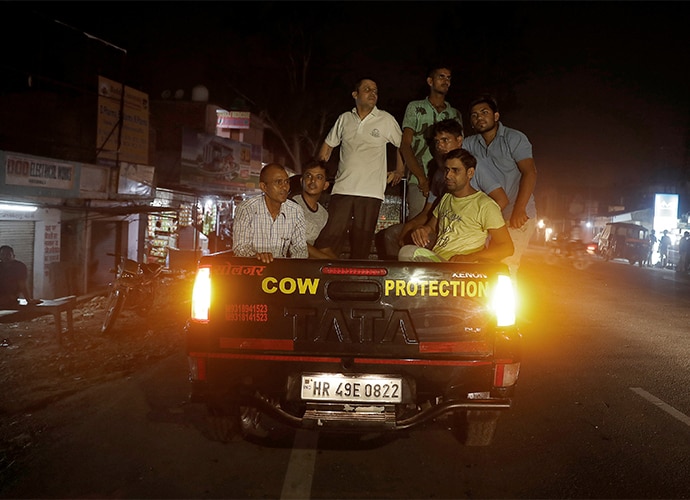 Standing Tall: With blood on their hands, Gau Rakshaks are seemingly above the law. [Photo: Reuters]

The court said it was the obligation of the Centre and the states to take steps to ensure that "nobody takes the law into his hands, nor become a law into himself", and asked them to file compliance reports in this regard within the next four weeks.

Earlier too, on September 6, 2017, the SC had asked all states to take stern measures to stop violence in the name of cow protection.

While the latest ruling is indeed welcome, the effectiveness of the new law, if passed by Parliament, will depend on its implementation.

Going by past cases, the perpetrators of such crimes have so far escaped the hand of the law not because legal provisions were not in place, but for the lack of fair investigation, ineffective and delayed prosecution, threats to victims, policemen who looked the other way, and political support given to the accused.

The spurt in cases of lynchings and mob violence in India is quite recent. According to data compiled by IndiaSpend, 70 cases of cow-related violence were reported in India since 2010. Sixty eight of these occurred after 2014, when the BJP government came to power.

The numbers are telling of the state's failure in controlling these incidents.

Even while avowedly pushing for "sabka saath, sabka vikaas," the BJP had not let go of any opportunity to consolidate its Hindu vote bank in the run-up to the 2014 Lok Sabha polls.

While the "cow slaughter cause" has been raised by religious groups for decades, it was only during the campaigning for the 2014 Lok Sabha elections that then-Gujarat CM and BJP's PM-hopeful, Narendra Modi, turned it into an emotive political issue. Linking cow slaghter with the "Pink Revolution" that was apparently going on unchecked under the patronage of the ruling Congress, Modi accused the Manmohan Singh-led Centre of pandering to the interests of a few who were exporting this meat to Bangladesh. The fact that most lynching victims have been Muslims makes it quite apparent who the 'mob's' targets are. [Photo: Reuters]

After the BJP came to power, the demonisation of Muslims continued unabated.

In 2016, finally breaking his silence after facing increasing flak over rising cases of vigilantism, all Modi could offer was an attempt to distinguish "good" gau rakshaks from "bad" gau rakshaks.

Perhaps what prompted the PM to speak up was the caste of the victims who were tied and beaten up in Una, Gujarat — Dalits — for skinning a dead cow. The community had voted overwhelmingly for the BJP in 2014, and the party feared losing them to the BSP again.

The Muslim community, sadly, was never as lucky.

While lives were lost to lynch mobs, the PM chose to willfully ignore Mahesh Sharma, a Union minister of his own government, attending the funeral of an accused in Mohd Akhlaq's lynching case, where the accused's body was draped in the national tricolour, perhaps signaling that the killing was carried out in defence of the motherland.

Raising of issues like love jihad, alleged atrocities under the Mughal regime, the Ram temple, cow slaughter, allegiance to Pakistan — which had no current context — sent a violent mob of criminals into a frenzy, suitably aided by rumour-mongering and WhatsApp forwards. Not wanting to be left behind, ministers and senior members of the ruling BJP further deepened the divide by demonising the community in speeches and demands.

All this schlock was bought, normalised and forwarded by a loyal army of social media soldiers, several of them followed by prominent members from the BJP, creating an environment that normalises bigotry and hate crimes.

Periodic statements were made that added fuel to the sectarian fire.

A narrative was deliberately created that Muslims were apparently the only stumbling block in India's development, and while being the biggest beneficiary of the State's largesse — seemingly at the cost of the majority group of Hindus — have been siphoning off most of the country's precious resources while still owing allegiance to the enemy across the border.

As a community was systematically othered —and the price for it paid in blood — the BJP deflected the blame onto state governments, glossing over the fact that it rules most states in the country.

A new law specifically against lynching can at best ensure that the accused are booked for the crime committed, instead of getting away with lighter sections of the IPC. But it cannot fix the communal polarisation that is leading to such crimes and the political patronage that is allowing perpetrators to go scot-free.

In rare instances where investigations do take place and the accused are prosecuted and punished, bigotry and shameless pandering to vote bank politics ensures that the convicted criminals walk away, most ironically, as "victims".

In March, a fast-track court in Jharkhand's Ramgarh district sentenced 11 people, including one local BJP worker, to life imprisonment for lynching a Muslim trader they suspected of transporting beef last year.

The ruling was feted as a significant and timely step to stop the rampant killings in the name of the cow.

However, on July 6, eight men convicted for the murder were granted bail by the Jharkhand High Court. Union minister Jayant Sinha celebrated the occasion by felicitating the convicted men. Why? Because the accused happened to be from his political constituency. And the minister apparently felt courting his vote bank was more important than observing basic humanity. The Harvard-educated Sinha is among the more "liberal" faces of the BJP. But then, education is the last thing that comes in the way of bigotry.

The utter disregard for human life in the face of naked political aspirations continues to empower murderers and criminals.

From Vikas to Cow to Muslim-bashing

The ruling BJP has realised that it has failed to deliver on its promise of "achhe din". Faced with growing anti-incumbency and a united Opposition, the party is banking on uniting Hindu votes to ensure a fighting chance in the 2019 Lok Sabha polls.

The spate of violence against Dalits raised a red flag within the party, with even the RSS issuing directions to increase Dalit outreach and allay fears that the BJP may do away with reservations if voted back.

Muslims, on the other hand, the party has realised, are more useful when demonised.

The constant invocation of Pakistan, Ram Mandir, and other provocative slogans are just to bait the community and deepen the communal divide.

While the community is increasingly getting marginalised and ghettoised, issues like triple talaq and halala are constantly raised to prove how regressive Muslims are. The fact that these issues were raised and taken to court and won by strong Muslim women themselves, with active support from a substantial population within the community, is conveniently ignored.

If PM Modi is actually serious about the welfare of Muslim women — something that he keeps repeating in his election speeches while talking about triple talaq — he should also shed a few tears for the widows, the daughters, the sisters and the mothers of the lynching victims, some of whom had to bear the sight of their loved ones being killed in front of their eyes, by a bloodthirsty mob egged on and encouraged by a complicit administrative machinery, and by dog-whistling politicians willing to overlook murder for a few votes.

In the aftermath of the 2002 Gujarat riots, former Prime Minister Atal Bihari Vajpayee had advised Modi to adhere to "raj dharma" and not discriminate on the basis of caste and religion. The PM, who bowed down on the steps of Parliament before he took oath, and cried during his first speech, should remember that he is the PM of the whole nation, and he swore to protect and work for all.

But, politics, as history shows, is not that simple.

As we move closer towards the 2019 polls, minorities would be the main pawns in a high-stake electoral battle. While the winners of the polls are not clear yet, Muslims are heading towards being the ultimate loser.