What lessons the Tripura elections verdict holds for the Left

Tripura specially saw the defeat of a popular, “people’s CM”.

The Tripura election results have struck a body blow to the CPM and the country’s Left Front as a whole. The Left had ruled Tripura for the past 25 years. Manik Sarkar held the reins of the state for two decades. But as votes were being counted on March 3, the BJP looked set to gain an unprecedented lead and form the government in the northeastern state.

With this, the number of states being ruled by the Left in India has come down to one, with Kerala as its last bastion. Bengal was lost a few years ago, and now the Tripura verdict has weakened the party considerably.

Tripura especially saw the defeat of a popular, “people’s CM”. Manik Sarkar has long been an example of the ethical and “clean” politics the Left espouses. Politicians like him are rare in today’s age. 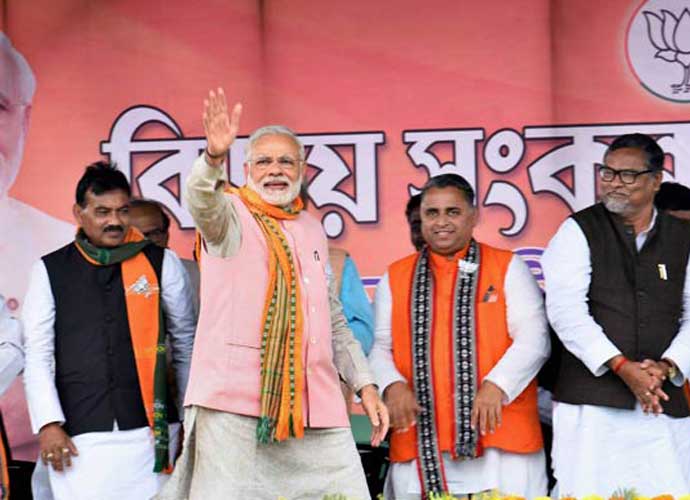 The combined might of Modi's appeal and the BJP's organisational strength was too much for Manik Sarkar to withstand. Photo: PTI

But Sarkar was fighting a grossly unequal fight. On one side was the CM standing alone, and on the other was the “world’s largest” party the BJP, which is ruling the Centre, has a Prime Minister like Narendra Modi, a strategist like Amit Shah, and the wide network of an organisation like the RSS.

Apart from this was the fact that the BJP is ruling 19 states in the country. Manik Sarkar’s state and stature were too small to withstand all this. He kept up the fight, banking on his record as CM and his administration. At the end, however, both were defeated.

While Sarkar was battling to retain Tripura, the CPM was trying to decide who was its main opponent – the BJP or the Congress. The party is well aware that the ever weakening Opposition is not good news for the country’s political future. It knows too that till the Opposition parties join hands, they have no chance of standing up to the might of the BJP.

Yet, the CPM can’t make up its mind on what should be its stand on electoral understandings with other parties. In fact, party general secretary Sitaram Yechury and former chief Prakash Karat are locked in a tussle over this.

For the parties that are convinced that the BJP’s brand of politics is detrimental to the country’s democracy and the Constitution, it is imperative to accept that they can only be effective if they come together. As the BJP made inroads in Tripura, the Congress remained a mute spectator. The Left could not manage to get any other party to stand up with it.

The people of Tripura had been used to one party for the past 25 years. They had the magic of “development” dangled before them and they jumped at it. This was the same magic that had swept through the country in 2014. Since then, apart from two setbacks, the magic has been electorally invincible.

So what should the Opposition have done? The least would have been to get over their mutual untouchability. Why didn’t political parties and heavyweights from the rest of the country try to counter the BJP’s narrative in Tripura? Why was Manik Sarkar, with no money backing him, left to fend for himself?

Why couldn’t the other parties put “the safeguarding of India’s democracy” over their political interests? Couldn’t they foresee that the BJP, with its immense money-power and Army-like preparations, would bring down the Left’s citadel brick by brick?

Prakash Karat has opposed Sitaram Yechury's proposal of an understanding with the Congress. Photo:PTI

But the other parties could have made overtures if only the Left would have been open to them. Today, the biggest challenge facing the country politically is a fragmented Opposition. No matter what the cost to the country, the various parties are seemingly incapable of coming together. And till the time they come together, regardless of how loud they cry about “saving the Constitution”, the Opposition cannot bell the BJP’s cat.

If the Opposition parties cannot work together, we will soon see them fade into political irrelevance. A fragmented Opposition benefits the BJP, and then the Congress. If voters have only two options, the parties can even arrive at a mutual understanding about staying in power.

Speaking on the Tripura results, CPM leader Brinda Karat said the BJP benefitted because the Congress could not retain its vote-share in the state. This is bizarre – you lose elections but want someone else to take the blame. When the party is refusing to have an electoral understanding with the Congress, how can it expect a united fight against the BJP?

The Opposition has been trying to “caution” the voters against the “ills of an all-powerful BJP”. But that is all it seems prepared to do. The various parties have no plan or strategy to counter the BJP together.

If the Left is serious about the future of India’s politics and democracy, it needs to take the lead in trying to unite the Opposition. The different parties with varied ideologies need to chalk out a common programme, so they can seriously and effectively challenge the BJP.