The problem is that continuing to spend on defence will not stall Pakistan's slide towards the financial abyss that is staring it in the face, which means - Pakistan is damned if it cuts its defence budget, and damned if it doesn’t.

There was a minor flutter when the first reports came of the Pakistan army chief announcing the “voluntary decision to forego even the routine increase in annual defence budget”. On cue, Prime Minister Imran Khan called this an “unprecedented voluntary initiative of stringent cuts in their defence expenditures for the next FY because of our critical financial situation…” But this ‘initiative’ was forced on Pakistan not just by the ‘critical financial situation’, but by the IMF which conditioned its bailout on Pakistan cutting the ‘primary deficit’ but without tinkering too much with the development programmes or social welfare schemes. Equally importantly, it is far from ‘stringent’.

For now, this ‘freeze’ on the defence budget is for the next financial year. While in nominal terms, the PKR 1.15 trillion defence budget is virtually the same as the revised defence spending of PKR 1.14 trillion in the outgoing financial year, it amounts to around an 11-13 per cent cut (accounting for inflation in 2019-20), provided the defence expenditure isn’t jacked up during the year, something that routinely happens. The Pakistan military is however confident that this ‘freeze’ in defence allocations will not affect its operational preparedness to ‘respond’ to any offensive action by India.

True, even if it is genuine, a freeze in the budget for one year will not significantly pare down Pakistan's defence capabilities. Only if the Pakistan economy continues to tank and the government perforce has to keep cutting the defence budgets over the next few years will it start to have a telling impact on the state of Pakistan's defence preparedness, especially vis-à-vis India. It is, however, highly unlikely that the Pakistan military will acquiesce to major cuts in allocations year after year. Devil and the deep blue sea? : Pakistan is caught between the crippling debts and military preparedness. (Photo: Reuters)

The last time a government tried to impress upon the military that while security was important, the government couldn’t fulfil all the demands of the military and had to strike a balance between defence and development, the finance minister had to go into exile and the ruling party was made to lose the general election.

Given the old cliché of Pakistan being an army with a state, the military gets Lion’s share of the national cake after debt servicing. In the budget for 2019-20, defence spending will account for 33 per cent of the total revenue available to the federal government. Just debt servicing and defence account for the entire federal government’s revenue. Every other expenditure made by the government is met from borrowing. And yet, the military and the puppets like Imran Khan have the audacity to ask questions about why Pakistan is drowning in debts?

For the military, it is the politically correct thing to present itself as sharing the rising burden and bearing the brunt of the adjustment and stabilisation policies that Pakistan is being forced to implement. To demand a rise in its budget when an overwhelming part of the population is facing economic distress would only add to the resentment against the military, more so when top economists have been openly warning that without significant cuts in defence expenditure there is no way Pakistan can become financially and fiscally viable. Even so, if the past record is anything to go by and given the Pakistani penchant for cooking books and hiding defence expenditures under other heads, chances are the ‘sacrifice’ that the Pakistan military is making with so much fanfare is more cosmetic than it is substantive. 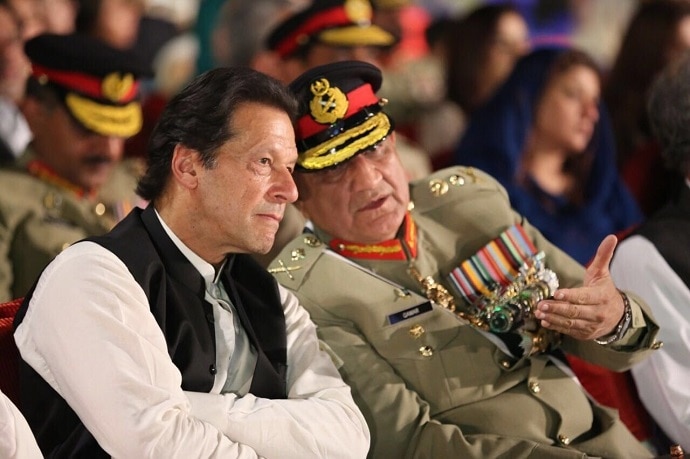 The defence spending will account for 33 per cent of the total revenue available to the federal government while every other government expenditure is met from borrowing. (Photo: PTI)

The defence budget number that is shown in the Pakistan budget documents doesn’t take into account pensions paid to defence personnel. In 2019-20, the pension bill of PKR 327 billion for ex-servicemen amounts to almost 33 per cent of the defence budget. Strangely, over the last 2 financial years, the defence pension bill in 2018-19 has grown by 40 per cent over the budgeted amount in 2017-18, and for 2019-20 it has grown by another 33 per cent over the 2018-19 number. This massive spike in pension bill in the last two years, when compared to the few percentage point increases in previous years, does raise questions.

Aside from pensions which no longer form part of the defence budget, the Armed Forces Development Program of PKR 308 billion, which is almost 33 per cent higher than what was allocated in the previous year. Other security-related expenditures and acquisitions are also not revealed in the defence budget. For example, last year it was revealed that around PKR 4.5 billion were allocated to ISI for “accomplishment of a special assignment” which was never explained. In the 2017-18 budget, apart from other things, the PKR 920 billion budget did not include PKR 180 billion under ‘contingent liabilities’ and around 90 billion under the head of Coalition Support Funds given by the US to Pakistan.

Given the preponderance of the Pakistan army, expecting deeper, substantive cuts in the defence budget is unrealistic, especially against the backdrop of deteriorating security and the strategic environment – Afghanistan in a flux, tensions with India not abating, a spike in terrorism, the spectre of a Pashtun civil insurrection. The problem is that continuing to spend on defence will not stall Pakistan's slide towards the financial abyss that is staring it in the face. What this means is that economically, Pakistan is damned if it cuts its defence budget, and damned if it doesn’t.

Post your comment
#Pashtun, #Afghanistan, #General qamar javed bajwa, #Imran Khan
The views and opinions expressed in this article are those of the authors and do not necessarily reflect the official policy or position of DailyO.in or the India Today Group. The writers are solely responsible for any claims arising out of the contents of this article.