Naya Pakistan in the new year? No, we will have the same broke, belligerent neighbour

Pakistan’s economy is in deep crisis, its politics is unstable, and its best friend is China.

Pakistan is not going anywhere this year. This is to say that the neighbour from hell is not going to disappear.

It is also ‘not going anywhere’ in the sense that ‘Naya Pakistan’ is going to be quite like ‘Purana Pakistan’. It will not transform into paradise. It is not going to become the most hip-and-happening tourist, investment or business destination. Its economy will not become the toast of the world. If anything, the economy will struggle.

The single-biggest problem before the Imran Khan government will be the economy, which is in the throes of a deep structural crisis. The first few months of ‘Naya Pakistan’ do not inspire much confidence in the ability of the new incumbents to address these issues — even less so considering that the unofficial ‘official spokesman’ of the government on finance has admitted that the current dispensation is more interested in suppressing the symptoms of the economic crisis, rather than the afflictions causing the crisis. But given that the foundations of ‘Naya Pakistan’ are built on simplistic, if also seductive, solutions — 'end corruption and Pakistan will become a land of milk and honey' — chances are that the country will continue to live off other people’s money for as long as it can.

The treatment is clearly not helping.

There is no sign of the balance of payments (BOP) crisis ending, despite Khan and his finance minister claiming otherwise. In their obsession to blame their predecessors for every ill in the system, the current lot has talked down the economy to a point that their subsequent efforts to talk it up, saying ‘all is well,’ have no buyer.

Clearly, all is not well and Pakistan is virtually staring at the bottom of the barrel, without any clear idea of how to pull the economy out of the hole in which it finds itself.

The flurry of loans taken from friendly countries will be money down the hole if essential structural reforms are not undertaken — something the populist government of Imran Khan isn’t ready to do.

Already, the $2 billion lent by the Saudis have been used up. The money coming from the UAE and the Chinese will likely end the same way. Of course, technically, these loans are only for window-dressing Pakistan’s balance sheet and are not to be used. But the pace at which Pakistan’s foreign exchange reserves are falling, it will have to dip into these deposits within a couple of months.

The Pakistani rupee has already fallen by around 30% over the last year. This means that the current account deficit will remain unsustainable and can be met only through further borrowings. But without the International Monetary Fund’s (IMF) backing, the loans are drying up.

The Chinese commercial loans are expensive, at 8%. Pakistan is balking at the conditions imposed by the IMF. If it accepts them, its economy will go through a very painful adjustment process, in which inflation, interest rates, power tariffs, etc., will spike, growth will fall in the short- to medium-term and unemployment will rise along with economic distress. 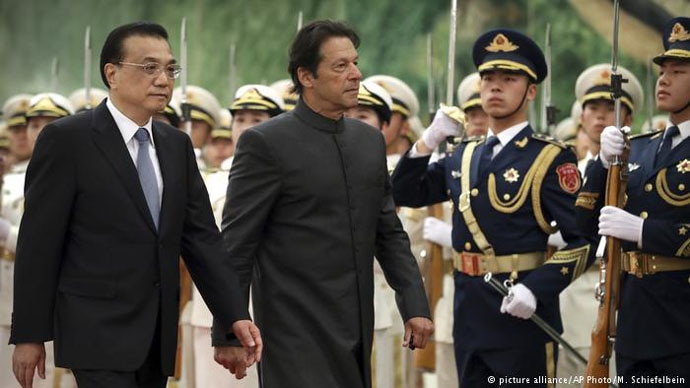 At present, only China is holding Pakistan's hand — and there are costs and consequences to that. (Photo: AP)

If Pakistan does not accept the IMF programme, the economy will continue to be in a tailspin, eventually leading to bankruptcy. Pakistan will be forced to default, or go back to the IMF in an even worse condition.

The economic crisis will only foul up an already bitter, even brittle, political scene.

Imran Khan has hardly helped matters by his needlessly aggressive and confrontational approach towards the Opposition. But once the economic downturn starts hitting the people, the Opposition will smell blood and go for the jugular.

For now, the government enjoys the full backing of the military establishment and even the judiciary. However, if it is unable to fix the economy, and the political and economic crisis becomes unbearable, it could mean trouble for Khan. In Pakistan, even a minority government is powerful as long as it enjoys the military’s backing, while even a two-thirds majority is not enough without it.

China to the rescue

On the foreign policy front, Pakistan is hoping that Prime Minister Narendra Modi-led BJP loses the upcoming General Elections, so that there can be political re-engagement with India. But this will be a stillborn process, as Pakistan policy towards — and use of terrorist proxies against — India remain unchanged.

With the US, a lot will depend on how much Pakistan is ready to deliver on Afghanistan. The current dialogue between the US and Taliban is tenuous and there is no guarantee of a negotiated solution. Moreover, there’s no clarity on whether the Taliban wants a solution, or to grab power.

Pakistan’s relationship with China will remain robust. Though tiny cracks are visible on the China–Pakistan Economic Corridor, economic issues, the treatment of Muslims etc., Pakistan is ignoring them — as China for it is the new US, the guy with the money and ‘toys for the boys.’

In 2019, Pakistan will remain a troublesome neighbour with a dysfunctional polity, a broken and broke economy, and a deviant foreign and security policy. The few short-term tactical successes will not be sustainable in the long run.