Why I think Pakistan was, is and will always remain a terrorist state

Just establishing terror camps and sending jihadis to India isn't terrorism. Terrorising a section of your own people is also terrorism. And Pakistan, by its very nature, cannot stop doing that.

In a speech delivered recently at the International Institute of Strategic Studies, London, the Pakistan Army Chief, General Qamar Javed Bajwa, waxed eloquent by uttering a pious platitude over how Pakistan was doing its best to wipe out terrorism.

The statement came a day after the Financial Action Task Force (FATF), in a plenary meeting held in Orlando, USA, directed Pakistan to swiftly complete its action plan to curb terror financing by September — or face consequences.

In my opinion, Gen Bajwa's statement was only a grandiose pontification and dissimulation made in light of the severe economic crisis Pakistan is facing.

Having gone with a begging bowl to the IMF, Pakistan does not want cuts in the financial aid it is getting from foreign countries which would make its economy collapse.

I submit that Pakistan was born, has always been, and will always remain a terrorist state. It was created on the basis of the bogus two-nation theory, which its main propagandist, Mohammed Ali Jinnah, relentlessly pursued (as I have elaborated here and here). Jinnah's hypocrisy becomes evident from the fact that at a time when large-scale communal massacres were taking place — which was obviously not unknown to him — he pompously declared in his speech on August 11, 1947, “You are free; you are free to go to your temples, you are free to go to your mosques or to any other place or worship in this State of Pakistan” — as if a man or woman being butchered is free to do so.

As I have detailed in a post, India, like North America, is broadly a country of immigrants. That is why it has so much diversity, so many religions, castes, languages, ethnic and regional groups. Whichever group of immigrants came here (and they have been coming to India for thousands of years, mainly from the northwest), they brought their own culture, religion, language and practices. So, in view of its tremendous diversity, the only policy which can keep India united is secularism and giving equal respect to everyone, and treating all its inhabitants as first-rate citizens. This policy of 'sulah-e-kul' was adopted by Emperor Akbar — who gave equal respect to all. Perhaps this is why the Mughal Empire lasted so long, with its people enjoying prosperity.

This makes Pakistan a terrorist state in two ways.

Firstly, non-Muslims (now only a few per cent of the population left after the exodus during Partition) automatically become second-class citizens (like the Jews under Nazi rule), who are often terrorised in various ways, including being physically attacked (for e.g., the killing of the Sikh Charanjeet Singh in Peshawar), blasphemy laws, forced conversion of minor girls — all of which have been a regular feature since the creation of Pakistan. Asia Bibi's case is a recent example. She literally fled: Asia Bibi had to leave Pakistan, fearing being murdered even after her acquittal in a blasphemy case. (File photo: Reuters)

Ahmadis, who are only about 5 million of the total population of over 200 million in Pakistan, are treated in a particularly barbaric manner. By the Second Constitutional Amendment of 1974 (made at the instance of Zulfikar Ali Bhutto, then Prime Minister and portraying himself to be a champion of the underdogs), Ahmadis were declared as non-Muslims as they allegedly do not regard Prophet Muhammad as the last Prophet. Thereafter, in 1984, Gen Zia-ul-Haq got the anti-Ahmadi laws passed, prohibiting Ahmadis from “posing to be Muslims” and prescribing a three-year jail sentence for the offence. Thus, Ahmadis are prohibited from publicly reading the Quran, offering namaz, calling azaan or calling their place of worship a mosque — when they apply for a passport, they must state that the founder of their sect, Mirza Ghulam Ahmad, was an imposter.

But the Kerala High Court held on December 8, 1970, that Ahmadis are Muslims, in the Shihabuddin Imbichi Koya Thangal vs K.P. Ahammed Koya case. Even if the majority of Muslims think otherwise, should Ahmadis be persecuted? Thousands have been brutally killed or physically attacked and humiliated in several ways.

Even after Imran Khan took oath as Prime Minister, an Ahmadi place of worship was set on fire in Faisalabad's Ghaseet Pura.

Blasphemy laws are often used to persecute Hindus, Christians and other minorities, particularly Section 295-C Pakistan Penal Code, which prescribes a mandatory death sentence for insulting the Prophet. Usually, the charges are false, as held by the Pakistan Supreme Court in Asia Bibi's case, and is often designed to grab the property of the accused or for personal vendetta. 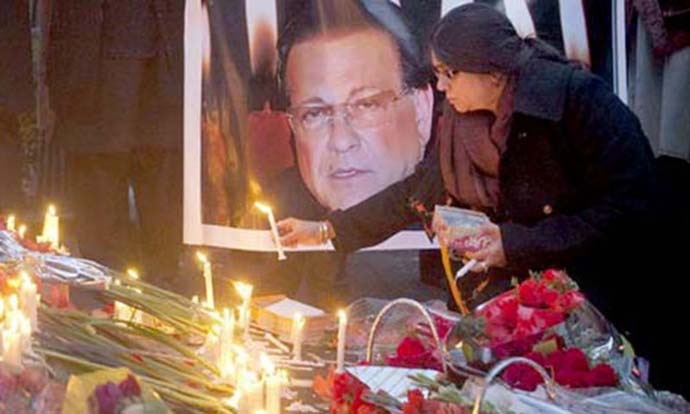 Gunned Down: Salman Taseer, then-Governor of Punjab, was killed by his own bodyguard for supporting Asia Bibi. (Photo: Reuters)

Is this not terrorism?

Once a charge of blasphemy is made to the police, it is next to impossible for the accused to survive in Pakistan. Usually, he/she is murdered even before any conviction. Often, even his/her lawyer is murdered. Both Asia Bibi and her lawyer had to flee Pakistan. The then-Governor of Punjab Salman Taseer and the Pakistan Minorities Minister Shahbaz Bhatti were murdered for sympathising with Asia Bibi. Mashal Khan, a student, was murdered because he was thought to have posted something blasphemous online.

Mashal was talking to @KhyberNews two days before his death &he was critical of Uni admin then admin issued blasphemy letter against him pic.twitter.com/h4K39OqA9P

During his election campaign which brought him to power in July 2018, Prime Minister Imran Khan shamelessly backed the anti-blasphemy laws and took the support of religious bigots and fanatics like the Tehreek-e-Labaik. He subsequently sacked the eminent economist Atif Mian from his Economic Advisory Council just because he was an Ahmadi.

Secondly, though Pakistan was declared an Islamic State, which Islam does it recognise?

In theory, Islam is one, but in practice, there are Shias and Sunnis, and various sects like Deobandis, Barelvis and Ismailis. There are often violent clashes between these sects. Barelvis recognise dargahs, which are shrines built on graves of Sufi saints, whereas most Deobandis regard visiting dargahs as the worship of graves and therefore, idol worship — which is prohibited by Islam. Dargahs in Pakistan are often bombed.

Terrorism does not mean only building terrorist camps and sending terrorists across the border for attacks on Indian soil. Internal terrorism — which is terrorising a section of one's own people — is also terrorism. But to stop that, Pakistan must declare itself a secular state and stop atrocities on its minorities. That is impossible — for it would be an end to Pakistan, leading to its eventual reunification with India.

The Pakistani army, which is the real ruler of Pakistan and rabidly anti-Indian, would never permit that.