Women in politics are just politicians. They are not saris, jackets, or a particular kind of laughter

Commenting on a female politician's gender, looks or attire reflects the misogynistic mindset of our politicians. This is seen across the political spectrum, from the 'traditional' BJP to 'new-age' neta Rahul Gandhi.

After the death of veteran socialist leader George Fernandes, I had the chance to meet his companion and fellow politician, Jaya Jaitly.

We talked about her long political life and her new book A Life among the Scorpions: Memoirs of a Woman in Indian Politics.

I asked her if politics for women was still like living among the scorpions ready to sting. ‘Yes.’ This was pretty much what she said.

And then, she shared her experience.

When Jaya Jaitley used to convene meetings as Samta Party president, it would often begin with an apparently innocuous comment like, “Jayaji, you are looking very beautiful. Your sari is pretty”. This used to anger her a lot.

The point she was trying to drive home was how women politicians have always had to put in that extra effort to be taken more seriously for their intellect and skill and not just appreciated for how they look.

Not much has changed, unfortunately.

What's common among them? They are all our politicians. And they have all faced misogny. (Photo: DailyO)

In 2019, when Priyanka Gandhi formally joined the Congress, it opened a can of misogynist comments from other politicians.

She is one of the general secretaries of the party, in-charge of Uttar Pradesh East, in the year of a massive General Election. An obviously threatened MP from Basti in UP criticised Priyanka for wearing “jeans and top” in Delhi and donning a “sari and sindoor” when she came to UP.

Our political system endorses patriarchy to such an extent that another Bihar minister from the BJP called 47-year-old Priyanka Gandhi “still a child”.

Another BJP leader, Kailash Vijayvargiya, said the Congress had no leader and wanted to contest polls by banking on “chocolatey“ faces.

For God’s sake, call her a ‘dynast’ who hasn’t yet proven her political acumen, if you please — but what’s the obsession with how she looks and what she wears? No, don't judge her by the way she laughs. (Photo: India Today)

One doesn’t have to travel far back in time to recollect how BJP leaders mocked a woman MP, Renuka Chowdhary, just because she laughed loudly.

It’s not the BJP alone. Politicians across party lines are united when it comes to practicing misogyny.

It’s one issue on which the ruling party and the opposition seem to agree on.

Very recently, when Rahul Gandhi didn’t seem to be satisfied by defence minister Nirmala Sitharaman’s answers on Rafale, he told the voters in Rajasthan that Prime Minister Modi asked a woman defence minister to defend him in Parliament. He later lectured PM Modi on Twitter for not being man enough.

This comes from the same gentleman who once tweeted with the hashtag #MeToo: "It's about time everyone learns to treat women with respect and dignity."

It’s about time everyone learns to treat women with respect and dignity. I’m glad the space for those who don't, is closing. The truth needs to be told loud and clear in order to bring about change. #MeToo

A senior leader like Sharad Yadav gets away with calling Vasundhara Raje, the former Chief Minister of Rajasthan, fat.

Has anyone ever commented upon Sharad Yadav’s own girth?

It doesn’t matter since being a man is apparently enough of a guarantee for his intellect and, hence, male politicos are exempt from any comments on how presentable they are.

Sharad Yadav, in this department, seems to be a serial offender.

In March 2015, he made sexist and racist comments about South Indian women. He said women in the South are ‘dark but as beautiful as their bodies’, and those in the north are not as good. Have we ever seen women politicians attacking their male counterparts on how they look, dress and laugh? (Photo: India Today)

When Smriti Irani, another Union minister, urged him to stop making such racist comments, this was his response: “I know who you are.” He was clearly referring to Irani’s earlier career as a television actor. Smriti Irani was also referred to extremely deridingly by Maharashtra Congress leader Sanjay Nirupam.

The late Tamil Nadu Chief Minister — and the icon of Dravidian politics — J Jayalalithaa, who was mentored by the legendary actor-politician MGR, had to go through manhandling, pinching, tearing of her clothes, by rivals in the party. She was left in tears and it is said that she decided to wrap herself in double layers of clothing and a protective cape after a harrowing experience. No, Rahul Gandhi. She is not 'a woman shielding Narendra Modi in the Rafale debate'. She is India's defence minister. (Photo: India Today)

She was manhandled by a DMK minister inside the state Assembly.

Meanwhile, Samajwadi Party’s Jaya Prada was called a ‘good looking actress’ with such disdain by another veteran UP politician, Azam Khan, that it sounded worse than abuse. Khan himself is known for his own histrionics.

When the BSP and the SP announced a tie-up for UP, BSP Supremo Mayawati was the target of obnoxious comments. Not Akhilesh Yadav.

And this time, such comments came from a woman herself!

BJP leader Sadhna criticised Mayawati for joining hands with a party that humiliated her in the infamous guest house incident in 1995 and said Mayawati was worse than a kinnar (eunuch). She later apologised for her comments — but her words reek of the deep-rooted patriarchy we are still struggling with. 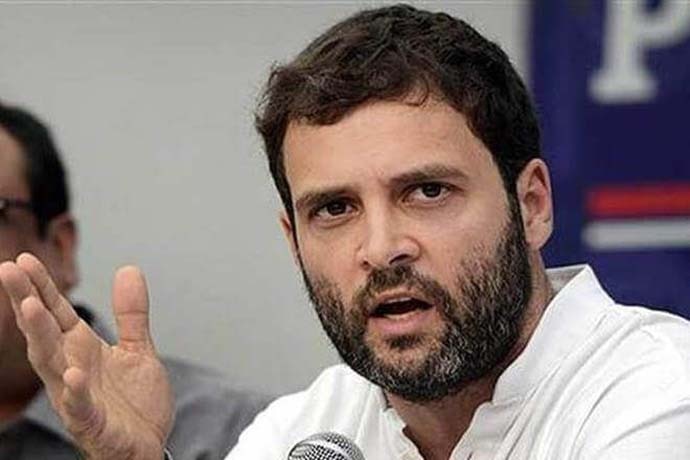 When Rahul Gandhi asks Narendra Modi to 'be a man', he fails as an enlightened man. (Photo: India Today)

It’s the clothes, the looks, the 'character' that becomes a matter of intense scrutiny — and a tool to pull down a woman in politics.

Women, on the other hand, seem to have no special interest in what their fellow men politicians wear in their constituencies and otherwise — during leisure with family and friends. Have you ever heard a comment from a woman on why wasn’t XYZ wearing a kurta pajama or a dhoti, or why did the PM wear a suit on his foreign trip, etc.?

For men, it’s never about their looks or clothes, boss! Why should it be? They apparently have all the intellect to override these lowly considerations. Men’s clothing apparently does not hurt our national, cultural and moral pride. We can pretend to be an equal society, but we will take very long to practise real equality.

Maybe it’s time to begin with politics — why not implement a code of conduct for our male MPs?