Why Mamata Banerjee is blaming Congress for Tripura loss

It's a shame the Left "surrendered so ignominiously" in Tripura. It went down without even blaming EVMs, rigging or the use of money and muscle power for its loss. But the show by Congress was worse which did everything to pump up the BJP from 1.5 per cent vote share and zero seats in the Tripura Assembly to 50 per cent votes and a comfortable two-thirds majority to form the first-ever saffron government in the state.

If Trinamool Congress chief Mamata Banerjee pitied  the Left for accepting defeat or what she called "self-destruction", she had all her fire directed at the Congress, especially Rahul Gandhi, who turned down her offer of a pre-poll seat arrangement and squandered all possibilities of a contest in Tripura.

She was so angry over the episode with the Congress that she minced no words in describing what transpired between her and Rahul ahead of the Tripura elections. "Now I can share this with you. I had personally approached Rahul, told him about seat adjustment. I told him that Trinamool will fight 14 seats, the hill tribes can fight 15 and Congress can fight the rest 30. Had we fought together, BJP would have been stopped at 10. I don't know who influenced him and made him turn down my offer," she said.

By holding the Congress, in other words, Rahul, accountable for failing to forge a grand alliance in Tripura, Mamata made it clear that the young and still-an-apprentice prince of the grand old party cannot decide for himself what is good and what is bad. He needs somebody to guide him, to influence him and decide for him.

On the one hand, an apparently off-the-cuff comment like, "I don't know who advised him and influenced him," puts a big question mark on the credibility and capability of Rahul to be in the driver's seat of such an alliance. On the other hand, by telling the world that Rahul had turned her down, she is creating a permanent wedge with Rahul.

It is like preparing the people to start thinking of a political platform where Trinamool Congress will be the decisive factor and the decision maker, and not the Congress. Mamata has already started the groundwork. She's meeting the disgruntled allies of the NDA, calling up leaders and exhorting the people of Bengal to attack Delhi (read Centre) by borrowing a line from Netaji - Chalo Dilli.

She has already put on the battle gear and is giving out the battle cry, "Aage Dilli Shamla, Pore Bhabbi Bangla" (first secure Delhi, then think of Bengal).

The meteoric rise of BJP in Tripura is giving Mamata jitters. Amit Shah has already announced that Bengal would be the next stop for the saffron juggernaut. And Mamata, honestly, for once, is not taking such ranting as hollow threats. 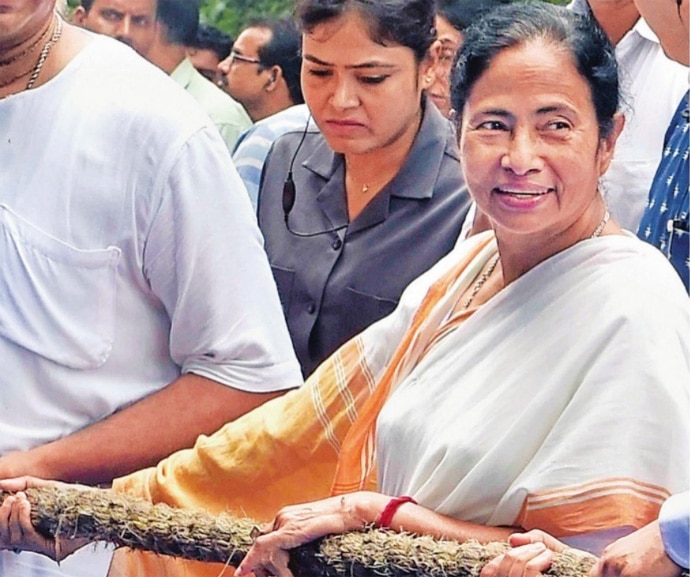 Tripura has made the impossible, possible. True, Tripura cannot be equated with Bengal in terms of size or population. But characteristically there is not much of a difference between the people of Bengal and Tripura. Both allowed the Left to rule for decades.

Perhaps with such an apprehension eating into her head, Mamata is continuously hammering the point that Tripura is a tiny state, with a population less than that of Howrah, one of Bengal's 23 districts.

She sees no reason for the BJP to rejoice over the Tripura win. A Tripura victory means nothing in the bigger scheme of things because the state has only two Lok Sabha seats.

She is not only downplaying the significance of the Tripura victory, now that the saffron storm has come so close to her own citadel, but also reassuring herself and others that a strong alliance would throw a formidable challenge to the BJP.

The move is a throwback to the Mamata and Uddhav Thackeray meeting and their promise of fighting together. The coming together of Samajwadi Party and Bahujan Samaj Party has rekindled new hopes and Mamata has extended her support to the two parties for the upcoming Uttar Pradesh by-election in two seats.

As of now, the regional parties are going ahead with the plan of cobbling up a Third Front, independent of Congress and the BJP. Mamata is taking the lead role by playing the convener of this front.

Asked, if the parties in the Opposition will be able to secure enough seats to make the Congress crouch on their back as an appendage and not a necessity, the Trinamool Congress leaders are not quite sure.

And as far as the leadership issue of the Third Front is concerned, there are too many cooks to spoil the broth. KC Rao has already announced that he was talking with like-minded people and "if required, I will lead the movement". With Mayawati, Sharad Pawar, Sharad Yadav, the Lalu Yadav sons and above everyone else, Mamata claiming the lead role, there are far too many prime ministerial aspirants around to.

Also read: Congress failing to form government in Meghalaya is a new low