Tulsi Gabbard first Hindu woman to run for US president: What this can mean for Hindus across the world

In 2014, Gabbard had come to India to meet PM Modi, and given him her personal copy of the Bhagavad Gita.

When Congresswoman Tulsi Gabbard, a Democrat from Hawaii, announced her intention to run for US president on CNN’s The Van Jones Show on January 12, she became the first Hindu to do so.

Gabbard, currently serving her second term in the US Congress, represents the 2nd congressional district of Hawaii. She was first elected to the Congress in 2012.  Gabbard is a member of the powerful House Foreign Affairs committee. She served as the vice-chair of the Democratic National Committee in 2013, a testimony of her rising clout in the Democratic Party.  She later resigned from the post in 2015.  Gabbard is also a co-chair of Congressional India Caucus. Tulsi Gabbard is the first Hindu woman to run for the top job in America. (Photo: AP/file)

Born into an interracial family (Samoan father, Mike, and a White mother, Carol), Gabbard moved to Hawaii in 1983 at the age of two. She was elected to the Hawaii State House of Representatives in 2002. In 2003, she joined the National Guard and served in the Iraq war as a medical operations specialist.

Gabbard is a practising Hindu. She was also the first Hindu ever elected to the US Congress. Gabbard is very open about her Hindu faith. A vegetarian, she took her oath of office on the Bagawad Gita, a revered Hindu text.  She has released, year after year, her now- famous Diwali greetings videos, and she was instrumental in getting stamps released by the United States Postal Service in recognition of Diwali, the festival of lights.

The significance of Gabbard’s just-announced presidential run, at least from the perspective of Indian Americans, is that she will be the first practising Hindu to run for the top post. One of the interesting facts about her Hindu faith is that she was not born into a Hindu family. Gabbard is a follower of AC Bhaktivendanta Swami Prabhupada, and belongs to his Hare Krishna movement. 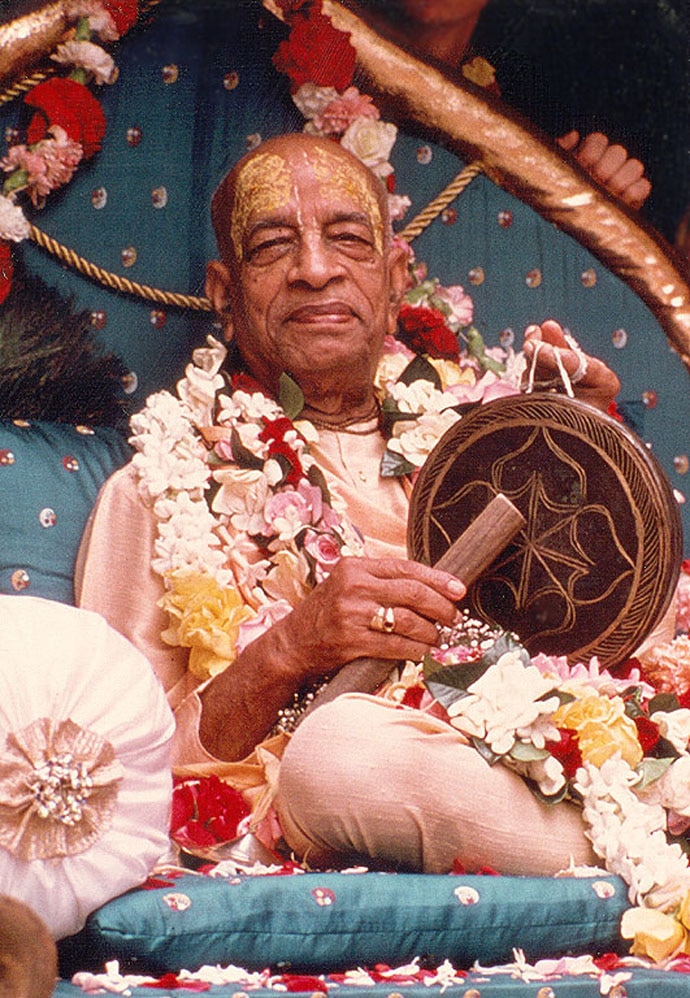 Gabbard is a follower of AC Bhaktivendanta Swami Prabhupada, and belongs to his Hare Krishna movement. (Photo: ISKCON)

Gabbard is somewhat of a political maverick.  Her formative years in politics and public life can be characterised as social conservative. She was ‘pro-life’ (against abortion) and was opposed to same-sex marriage. Her position on these very sensitive issues has changed over time.

She was critical of President Obama, a fellow Democrat, for not recognising ‘Islamist extremists’ as enemies of the country. Her foreign policy position is largely anti-interventionist.

While the US was still engaged in the Syrian conflict opposing Bashar Al-Assad, Gaddbard flew to Syria to meet him. She also did not think that Assad’s regime was responsible for the sarin-gas attack, a view that was widely criticised across the board.

While nobody can doubt Gabbard’s bona fide to run for the top office, she will have her hands full.

First of all, she will have to fight the name recognition battle. Though she has had a relatively high-profile political career full with media gaze and all, she is virtually an unknown in the American hinterland. A recent Spectator Index poll on Support for Democratic presidential candidates for 2020 did not figure Gabbard’s name in the list of 8 candidates.

She will also have to fight against establishment elements of the Democratic Party. During the last presidential election, owing to her differences with Hilary Clinton’s campaign, she had broken ranks with many such elements to support the candidacy of Bernie Sanders.  Sanders eventually lost out to Clinton in an acrimoniously lengthy campaign. During the last US presidential election, Gabbard had supported Bernie Sanders over Hillary Clinton. (Photo: AP/file)

As if this wasn’t enough, Gabbard was also rumored to be on the shortlist of candidates to join the Trump cabinet. Trump and Gabbard did meet after the presidential election, but no announcement was made in this regard.

Gabbard’s open and public embrace of Hinduism may also prove to be a hindrance.  Hindus are one of the tiniest, yet highly successful, religious groups in the US.  As a minority, Hindus are subjected to the same discriminatory treatments that most other minority groups face, but Hindus have more or less failed to organise politically to highlight this discrimination.

Indian Americans in general and Hindu Americans in particular are still guided by the politics back home in India. In this background, both her political opponents as well as the opponents of Hindu causes have exploited Gabbard’s relationship with India’s Prime Minister Narendra Modi.

During her much-publicised 2014 trip to India, Gabbard met PM Modi and gave him her personal copy of the Bhagavad Gita, the copy she carried with her in the battlefield as a soldier. This was the same Gita she swore on when she took oath as a member of the US Congress. Many radical left groups have relentlessly targeted her as well as her campaign. 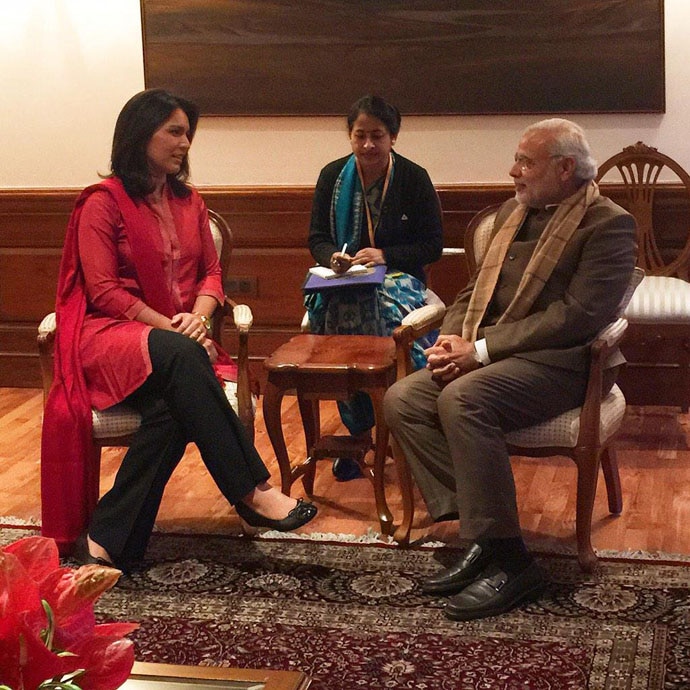 In 2014, Gabbard had come to India to meet PM Modi. (Photo: Twitter/Tulsi Gabbard)

It is no secret that most Indian Americans are the votaries of the Democratic Party. Only Donald Trump, in the last presidential election, was able to make any considerable dent in this vote-bank.  Indians, including many high-profile Hindus, have been making donations to politicians and political parties in the US. However, financial backers of Gabbard were exclusively targeted by ultra-left hate groups.

Due to similar targeting, Gabbard had to withdraw from the 2nd World Hindu Congress in Chicago in 2018, where she had agreed to be the Chairperson. This left a bitter taste in many of her admirers’ mouth.  Will her potential Hindu donors and supporters forget about this snub and open their hearts and chests? We will soon find out.

One of the potential outcomes of Tulsi Gabbard’s presidential bid could be the focus on Hinduism. There will be questions, doubts that will need to be answered.  The way these questions are answered may pave the way for a narrative Hinduism has not seen before.

Hinduism in the modern times has been defined mostly by outsiders. This may provide an opportunity for an insider, a follower of the faith, to define Hinduism on the world stage, and not Indologists or Leftist-Marxist scholars.

It was nearly 125 years ago, in 1893, when Swami Vivekananda, the 'learned Brahman Hindoo' arrived in the US and made his now famous speech in Chicago at the World Parliament of Religions. That introduced Hinduism to America and the West in a manner not done before.

Tulsi Gabbard’s presidential bid has a potential to do the same.

It has the potential to put the Hindu principles of Dharma not only in the front and center of US politics, but also as an alternative to the traditional left-right, liberal-conservative politics worldwide.

As Somanjana Chatterjee, a San Francisco-based media personality, writer, and activist puts it, “America can do with a leadership that upholds the Hindu teachings of Dharma, pluralism, and mutual respect”.

Also read: Why the 'cricket diplomacy' between India and Pakistan makes me hopeful