In the 2014 multilingual (though largely Marathi) legal drama Court, Narayan Kamble (played by Vira Sathidar), a teacher, social activist and protest singer, finds himself in police custody because a manual scavenger allegedly commits suicide, influenced by a song Kamble had performed in his slum. Tedious hearings, mundane arguments and deteriorating health conditions lead to Kamble getting bail, but only for a short while. He is subsequently arrested again on charges of conducting allegedly “seditious” camps under the cover of folk-artist workshops.

Aside from casting a cold, unforgiving glare on the repetitious processes and the bureaucracy plaguing the lower courts in India, Chaitanya Tamhane’s masterful film subtly touches upon an unnecessary law that has continued to exist for more than half a century — solely because of its anti-democratic potential and uses: The Unlawful Activities (Prevention) Act, 1967 (UAPA).

On June 6, 2018, the Pune police arrested six activists — Rona Wilson, Rana Jacob, Sudhir Dhawale, Shoma Sen, Mahesh Raut and Surendra Gadling — in connection with the violence at Bhima-Koregaon on January 1. All six of them were booked under the UAPA.

“We have been able to establish the money trail between these Naxal sympathisers and Naxals ahead of the Elgar Parishad in Pune on December 31, 2017. Offences were registered against some of these activists, including Dhawale, in January for the violence in Bhima-Koregaon on January 1 that we believe was triggered by their inflammatory speeches at the Elgar Parishad. We have accumulated more evidence in the last few months and have a stronger case now,” a senior police officer in Nagpur associated with the state’s anti-Naxal operations told Mint.

Not digressing into a seemingly gross miscarriage of justice that is apparently arresting social activists while letting demagogues like Sambhaji Bhide roam free — something that members of the Elgar Parishad and politician-cum-Dalit activist Prakash Ambedkar have insinuated — the UAPA, on its own, has been a cavalcade of despotism and brutality, resulting, almost as a trend, in the suppression of fundamental rights, especially of the minorities and the marginalised. 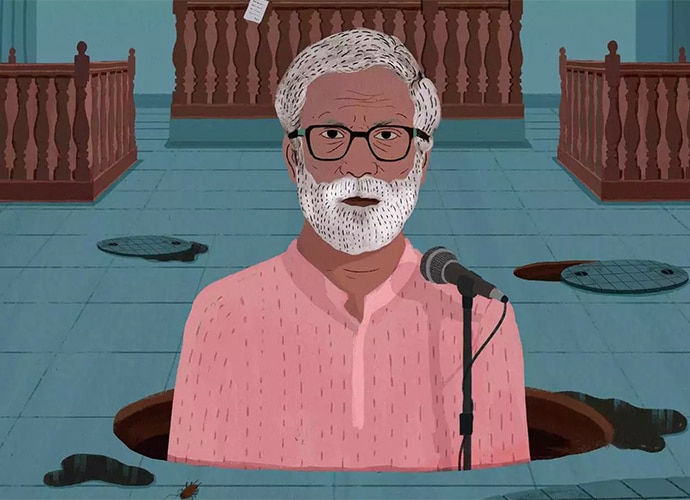 Born on December 30, 1967, to the Congress government of Indira Gandhi (a leader whose taste for the authoritarian has been sufficiently established in history), the UAPA turned 50 last year.

And, in the five decades of its existence, the UAPA’s path has been littered with injustices and exploitation.

Last year, GN Saibaba, a wheelchair-bound teacher with 90 per cent physical disability, along with five others, were convicted by Suryakant Shinde, a sessions judge at Gadchiroli District Court, Maharashtra, under Sections 13,18, 20, 38 and 39 of the UAPA and Section 120B of the Indian Penal Code (IPC). The charge was allegedly having links with Maoist organisations. Saibaba’s lawyer Rebecca John told Scroll.in, there was no evidence that he had “any role to play in any violence, or in incitement to violence, or any active participation at all,” and instead, he was accused of “promoting and propagating communist ideology”.

In 2011, the anti-terror squad of the Maharashtra police filed charges against 15 members of the Kabir Kala Manch — a cultural outfit that was formed in Pune post-the 2002 Gujarat riots, which used protest poetry and plays to take on government policies and address social inequalities — for allegedly having links with Angela Sontakke, who, the police claimed, was a senior member of the banned organisation, the Communist Party of India (Maoist). Six members were arrested immediately and the rest charged (but could not be located) under the draconian UAPA.

Again in 2011, 19-year-old Jyoti Babasaheb Chorge was arrested in Pune for possessing books containing Maoist literature. She too was booked under multiple sections of the UAPA. What put her on the police radar was the fact that she was friends with a lot of people who were held in a spree of arrest. Yet again, an arrest made in the name of ideology and association.

Judge AM Thipsay, who presided over the case and granted Chorge bail, noted: “That the possession of certain literature having a particular social or political philosophy would amount to an offence, though such literature is not expressly or specifically banned under any provision of law, is a shocking proposition in a democratic country like ours.”

In the notorious “Hubli Terror Conspiracy” case of 2008, 17 Muslim youths were accused of being part of a hit squad of the Students Islamic Movement of India (SIMI), another banned organisation, and arrested under Sections 120B, 121, 121A, 122, 124A, 153A(1AB), 153B(1A) of the IPC and sections 10, 11, 13 of the UAPA, for allegedly planning a series of terror strikes across Karnataka. After seven years, a trial court in Hubli acquitted all 17 accused. The youths were charged with having “jehadi” literature, which, in fact, was nothing more than copies of the Koran.

Another example of the UAPA’s fascist tendencies was the 2010 arrest of Tehelka journalist, KK Shahina, who was was charged under the UAPA for investigating the reported framing of Muslims by the Karnataka Police in cases of terror. Initially charged under sections 506 and 149 of IPC, for intimidating witnesses, which she claims were fabricated, Shahina was also charged under the UAPA while she attempted to seek anticipatory bail in the district court. Needless to say, her bail was rejected.

These are but a few examples.

The UAPA, by its own definition, does not arrest citizens for committing a crime. It does so to prevent them from doing so.

But what constitutes an “unlawful activity”? Just about any action that either “disclaims, questions, disrupts or is intended to disrupt the sovereignty and territorial integrity of India” or causes or is intended to cause “disaffection against India”. Left intentionally vague, these words manage to cover almost any action that the “Designated Authority” feels can constitute a threat against the nation, thus justifying the state to subdue one’s fundamental rights (Articles 19 and 21) in the name of national security.

Being a special law, the UAPA allows the police unconstitutional powers — searching, seizing and arresting without warrants, the low probability of getting bail and a provision that allows the accused to be held for 180 days without a chargesheet being filed.

That is, six months of no accountability, which allows the police forces to take time and build a case. And, in this lack of accountability, festers torture and inhumane practices.

A Media Collective feature on the UAPA stated that as per the government’s own statistics in 2014, 72.2 per cent of those convicted under UAPA have gotten acquitted.

Essentially, seven times out of 10, a criminal is not caught under the UAPA. Instead, a citizen has his or her rights, dignity and freedom stripped off them in the name of a vague sense of "threat".

Arun Ferreira and Vernon Gonsalves — both having suffered under the draconian act — write: “Like earlier anti-terror laws such as Terrorist and Disruptive Activities (Prevention) Act, 1987 (TADA) and Prevention of Terrorism Act, 2002 (POTA), UAPA too, criminalises ideology and association. By virtue of declaring an organisation 'unlawful’ or/and ‘terrorist’ and banning them, these Acts have de facto criminalised their ideologies.”

Of course, as Susan Abraham, a lawyer and a member of the Committee for Protection of Democratic Rights (CPDR), argues in her Economic and Political Weekly essay: “Supporting an ideology, even if the same ideology is adhered to by a banned organisation, cannot be a crime.”

So, why is UAPA still a thing?

Why is this law still allowed to be abused by a country that likes to boast of itself as the world's largest democracy? Those in power will tell you it is to keep the nation safe. But those on the receiving end of its unfairness, even without having to utter the words, will testify to its blatant oppressiveness.

If it is this easy for a nation to abandon the democratic fundamental rights of its citizens in the name of vague threats to security, one can only fear what this law will mutate into in the next 50 years.