UP by-polls: Why Yogi Adityanath’s future hinges on Kairana

If the BJP loses Monday's by-polls, UP's firebrand CM could face the heat, having to justify his position as star campaigner and Hindutva icon.

The one and only thing at which Uttar Pradesh chief minister Yogi Adityanath excels is playing the politics of religious polarisation. However, of late, that does not seem to be paying really rich dividends to the BJP.

The reverses suffered by the party in Yogi’s own bastion, Gorakhpur, was his life’s biggest blow and probably the first major setback ever since he rode onto the coveted position of chief minister. What made this worse was that the ruling party also lost miserably on the Phulpur Lok Sabha seat from where UP deputy chief minister Keshav Prasad Maurya had romped home successfully amidst the Modi wave of 2014.

The saffron-clad UP CM did undertake a hectic six-day campaign in Karnataka where he addressed rallies in 33 Assembly constituencies. However, contrary to BJP claims about the party having performed “exceedingly well” in each of the constituencies visited by him, the fact remains that the party won in only 13 of those seats.

God alone knows by what standard that is a “commendable” performance.

However, that does not seem to have visibly dampened his spirits, perhaps because he continued to believe that he still had the skills to polarise any election and that these efforts had never gone in vain. That was often demonstrated in his claims, aired by his propaganda machinery which does not tire with crediting him with “success” wherever he goes campaigning. Significantly, any victory in a constituency that he may have visited just once is brazenly attributed to him - to the extent that this tends to even snatch the credit that may be actually be attributable to the one-man army of Narendra Modi. 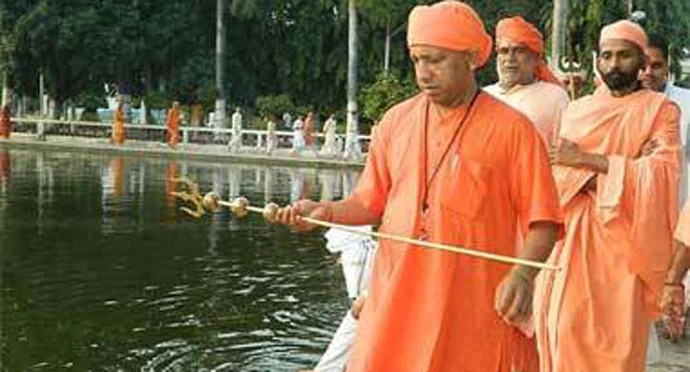 Since Yogi’s loud and assertive speeches are laced with venomous divisive potions, no one in the party dares to question his claims, however tall these might be. And that is what provides him with more energy to go about blowing his own trumpet.

That is precisely what he is doing currently in the Kairana Lok Sabha and Noorpur state Assembly constituencies that will have by-polls on May 28 in Western Uttar Pradesh. While the Kairana by-election follows the demise of its long-time incumbent BJP veteran Hukum Singh, the by-poll in Noorpur was necessitated on account of the death of BJP MLA Lokendra Singh Chauhan.

The BJP is hoping to sweep the Kairana seat in the sympathy wave for Hukum Singh’s daughter Mriganka Singh. She does not have any great political track record though — she lost the last state Assembly election in 2017 from Kairana to the SP candidate by a wide margin of 21,000 votes. No wonder the saffron-clad UP chief minister is leaving no stone unturned to polarise the voter on communal lines. What's worse, he was playing a card that had been discarded by none other than the late Hukum Singh himself, well after the infamous Muzaffarnagar riots that created a sharp communal divide in large parts of Western UP. Polarisation did help the BJP reap a political harvest in 2014 - but the scenario has changed drastically since then.

Significantly, the Opposition has once again joined hands to give the mighty BJP a run for its money in both these elections. That has led to building new caste equations that now pose a threat to the BJP’s communal polarisation designs.

Tabbassum Hasan is the united opposition candidate against BJP’s Mriganka Singh in Kairana. But, in addition to the Samajwadi Party-Bahujan Samaj Party combine that gave the BJP a devastating blow in Yogi Adityanath’s own bastion of Gorakhpur and in Phulpur, the Rashtriya Lok Dal (RLD) has also pitched in here to combat the BJP. And the Congress too is openly backing the "united" opposition nominee. The bypoll is crucial for RLD, looking for a revival

Yogi Adityanath may be busy making oft-repeated proclamations about "Sabka saath, sabka vikas", but the ground reality is that he was doing every bit to create a sharp divide only on religious lines. He was busy echoing the bogey of A "Hindu exodus" on account of alleged harassment by "lumpen Muslims". Apparently, realisation had not dawned on Yogi that Hukum Singh, who was the first one to talk about large-scale Hindu migrations from Kairana, himself backtracked on the issue.

"I was misinformed that Hindus were leaving on account of harassment by Muslims from Kairana. Inquiries made by me later disclosed that this was not a Hindu-Muslim issue, but the exodus was happening because of increasing goondaism in the area," Hukum Singh had confessed to the media, even though he had himself furnished a list of 254 people who were alleged to have moved away from Kairana due to intimidation by Muslims.

A subsequent reality check by The Indian Express further unearthed the fact that there were several Muslims too among those who had migrated from Kairana. It was also discovered that while some of those named in the list had died, there were many who had shifted to other places, not under any kind of pressure, but in search of better economic prospects.

Unfazed by the startling revelation made by Hukum Singh himself during his lifetime, the UP chief minister got down to whipping up passions in the name of THIS “Hindu exodus”. His desperation to prove himself right was amply displayed in his government last month to all district magistrates and police chiefs, seeking details of an exodus of people on account of communal factors, until March 2017.

Considering that he rode to power on March 19, 2017, the idea was to obviously blame the exodus on the Akhilesh Yadav government, which has been accused of patronising Muslim criminals. Quite discreetly, Yogi avoided seeking any information on any exodus after his government came to power.

"The fact of the matter is that migration of people is a routine affair and continues to happen at all times. And such migrations have been taking place even after BJP came to power, which was why details of that period have not been sought," pointed out senior SP leader and former minister Rajendra Chaudhary, who also hails from that very region in Western Uttar Pradesh.

Not very long ago, when the BJP raked up the issue of the presence of Mohammad Ali Jinnah’s portrait in Aligarh Muslim University (AMU), it was done with the obvious intent of communalising the election in Kairana, that region being close to Aligarh. However, good sense prevailed, thereby preventing any Hindu-Muslim flare-up that could have forged a polarisation of votes on communal lines.

There are more real issues here. What had already come in Yogi's way were the outstanding dues of sugercane farmers who form a large chunk of voters in the entire western UP. And the Opposition was doing its bit to use the sugarcane dues as a major poll issue. According to reports, farmers sold cane worth Rs 29,822 crore to sugar mills and received Rs 19,707 crore in the state during the sugarcane season 2017-18. The mill owners owe 44 per cent of the total sale to farmers which roughly amounts to Rs 10,000 crore. In a last attempt to save the face of his party, it has been announced on Wednesday that an amount of Rs 73 crore would be released in a day or two.

The issue will bite the party hard as this was a major poll promise. While campaigning for UP Assembly elctions, Prime Minister Narendra Modi had promised to take the matter in his hand. "My sugarcane farmer does the hard work. The sugar mill owners are fat, but my farmer has nothing to gain. My government in UP will clear dues within 14 days. I want to ask the UP government what was the reason why sugarcane were not paid their dues. We put 99 per cent of the money in the farmers' bank account," he had said.

The BJP already stood quite rattled by the grand alliance of Opposition parties — SP, BSP, RLD and Congress — that virtually formed a strong caste barrier. Understood to have assured his party bosses that he would break this caste barrier by polarising Hindus, Yogi Adityanath appears to have finally realised that it was going to be a tall order under the changed political circumstances.

And if he fails in his mission on Monday, Yogi could be in for troubled times as forces from within may begin to question his privileged position as a national star campaigner and a Hindutva icon.

#Kairana by-poll, #Uttar Pradesh, #Religious polarisation, #Yogi Adityanath
The views and opinions expressed in this article are those of the authors and do not necessarily reflect the official policy or position of DailyO.in or the India Today Group. The writers are solely responsible for any claims arising out of the contents of this article.