Adityanath says crime is under control in Uttar Pradesh: Is CM delusional, or just lying?

A fact-check of claims made by the BJP’s star campaigner.

In a mystifying assertion, Yogi Adityanath, Uttar Pradesh’s chief minister, has claimed that under his rule, law and order has been under control, “crime against women is minimal. No riots have been reported under the 10 month rule of BJP. No curfew has been imposed in the state”.

Adityanath made the statement in Tripura, where he is among BJP’s star campaigners in view of the upcoming state elections.

Law & Order in Uttar Pradesh is under control. Crime against women is minimal. No riots have been reported under the 10 month rule of BJP. No curfew has been imposed in the state: Yogi Adityanath, UP CM in #Tripura pic.twitter.com/gn06Dw3aZy

Curfew was, in fact, imposed in Uttar Pradesh barely three weeks ago over the Kasganj clashes. Adityanath’s claims throw up worrisome possibilities. Is the CM:

Adityanath holds special significance for the BJP in Tripura, apart from his appeal as macho Hindutva’s posterboy. The state has a significant population of Bengalis who belong to the Nath sect, of whose Gorakhnath temple Yogi is mahant (priest).

In his speeches, he has laudably tried to talk governance and administration, but comparisons with his own state have made his claims ironic. Yogi, however, has experience of this - in the past, he has faced flak for saying Kerala should learn to run hospitals from UP, where 62 children died in a hospital in the CM's hometown, and public healthcare is deplorable.

On February 14, Adityanath said he was concerned about the safety and security of women in Tripura. “Women here are not protected and incidents of rape and molestation were happening frequently,” he said, and added that empowerment and education were required for the development of women.

According to latest NCRB data, in 2016, Uttar Pradesh reported 4,816 cases of rape – among the highest in the country. Tripura reported 207 cases. The other two states with the highest rates of crimes against women were Maharashtra and Madhya Pradesh, both ruled by the BJP. Of course, Adityanath only became the CM in March 2017, and cannot be blamed for crime figures before that. However, according to data produced in the state Assembly, 803 incidents of rape and 729 murders were reported in the first two months of his tenure.

Again, while Adityanath cannot be blamed for these figures, his previously stated views make him an unlikely champion for women empowerment – in Parliament, he had gone against the BJP’s official position to oppose the Women’s Reservation Bill, first calling for an impact assessment study of “public life” on women’s role as “mothers, daughter and sisters”.

In an article he wrote on his website, Adityanath had stated: “Considering the importance and honour of women… our scriptures have always spoken about giving her protection… As energy can go waste and cause damage if left free and uncontrolled, women power also does not require freedom, but protection…”  and that “a home gets destroyed when women become as effective as men.”

After coming to power, Adityanath’s most notable step towards making Uttar Pradesh a safer place for women has been the creating of anti-Romeo squads, which, under the grab of “protecting” women, have become agents of moral policing. Ironically, reports have stated that the squads have hit women’s independence instead.

Another worrying trend in Yogi’s UP has been the steep rise in “encounters” of alleged criminals by the police. While encounters are extrajudicial killings and have no place in a democracy, such frequent gunfights mean policemen too are paying the price – since Yogi came to power, 196 "criminals" have sustained injuries in “encounters”, while at least 212 policemen have been injured, and four have died. 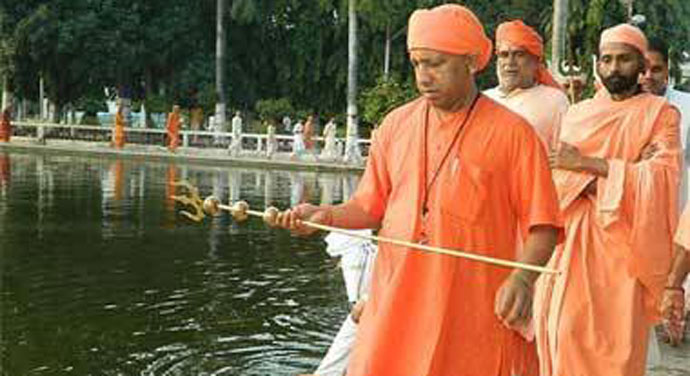 A Times of India report quotes ADG, law and order, Anand Kumar, as saying, “Directives are issued to field officers to hunt down wanted criminals on a regular basis and ambushes take place if criminals refuse to surrender.” On February 15, the CM reiterated in the Uttar Pradesh Legislative Council that police encounters in the state would not stop.

This is nothing but institutionalsing murder – the Constitution of India guarantees everyone the right to be heard in court, and courts alone have the power to hand out punishments. While gun battles between criminals and law enforcement agencies are unavoidable, they cannot be made official state policy.

The caste and community of crime

While a notable dip in crime in UP - one of the BJP's poll promises - is yet to be seen and it is too early to expect transformative changes from Yogi’s government, there have been some perceptible differences – a more obvious muscle flexing by Hindutva goons, and the administration going lax where victims are from the minority communities or Dalits.

In October during Muharram, Kanpur saw communal clashes. Schools were warned not to celebrate Christmas by Hindu Jagran Manch. During Ambedkar Jayanti in Saharanpur, BJP MP Raghav Lakhanpal took out a shobha yatra without police permission, and chanting slogans such as “UP mein rehna hoga, to Yogi-Yogi kehna hoga”, and “Jai Shri Ram”, went through areas with Jatav and Muslim population.

The incident snowballed into a major clash between Thakurs (Adityanath’s caste) and Dalits, and 60 Dalit houses were burnt. While the Dalit leader Chandrashekhar Ravan has been slapped with the National Security Act and is in jail despite protests, there has not been much action against the Rajputs.

There have been numerous cases of Muslims being heckled and assaulted -most notably the lynching of Mohammad Akhlaq and Junaid - and the state making it clear which side its sympathies lay.

In Tripura, Adityanath has said: “Our mantra is development and good governance.” If only he could ensure the same in his state, and make sure the administration looks after every citizen, without checking their caste or community.

#Uttar Pradesh, #BJP, #Tripura election, #Yogi Adityanath
The views and opinions expressed in this article are those of the authors and do not necessarily reflect the official policy or position of DailyO.in or the India Today Group. The writers are solely responsible for any claims arising out of the contents of this article.