Unless political narratives vis-à-vis Muslims change, it will have little impact.

Dubai's JW Marriott Marquis Hotel issued a statement on June 13 informing the world about the  termination of the contract of celebrity chef Atul Kochhar after his “anti-Islam” tweet went viral, creating a furore on social media.

The Michelin-starred chef found himself steeped in controversy after he tweeted to actor Priyanka Chopra: “It is sad to see that you have not respected the sentiments of Hindus who have been terrorised by Islam for over 2000 years. Shame on you”.

Chopra stars in the popular US TV series Quantico broadcast on ABC. On June 1, it aired an episode titled “The Blood of Romeo” that got flak from several Hindus in India and abroad for showing a Hindu terrorist.

In that episode, her character, Alex Parrish prevents a terror attack that was believed to have been planned by Pakistanis just before a summit on Kashmir. But she discovers later that it was the handiwork of right-wing Hindu nationalists who wanted to derail the peace talks between two countries by blaming the attack on Pakistanis. 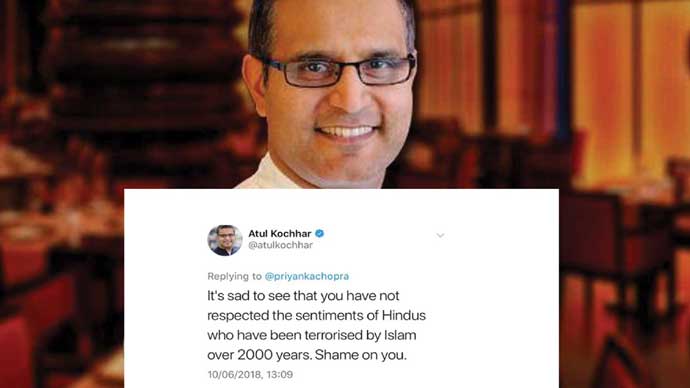 That explains why PM Modi makes it a point to address the diaspora in almost every country he visits.

It was rather ironic that in a country where Muslims have been stereotyped and vilified in the most crass ways possible in popular films and TV series without much objection from any quarter, Indians suddenly became hypersensitive about the depiction of Hindus as alleged terrorists.

Moreover, it is a matter of fact that several rightwing Hindutva terrorists, some of whom were members of the RSS at the time of the crime, have been prosecuted in the Ajmer blast case, and are also accused in several other terror cases, including the Samjhauta Express bombing, the Malegaon blast, et al (though some have been acquitted in the Mecca Masjid blast case).

After the uproar, both ABC and Chopra issued mea culpa.

I’m extremely saddened and sorry that some sentiments have been hurt by a recent episode of Quantico. That was not and would never be my intention. I sincerely apologise. I'm a proud Indian and that will never change.

Kochhar’s tweet that has since got flak from different quarters was in response to this tweet of Chopra. Many soon pointed to not only his bigotry, but also the factual error in the tweet. Former journalist and art curator Irena Akbar highlighted the irony that he does business in the “deserts of Arabia where Islam emerged 1450 years ago”, urging people to report him to Dubai police to “shut his restaurant in the land of whom he calls ‘terrorists’”.

Writer and human rights activist İyad el-Baghdadi joked that an Indian could have got the dates wrong since “Hindus invented arithmetic”.

"Hindus were terrorized by Islam over 2000 years". Dude, Islam is only 1500 years old, and the Muslim Ghaznavids only invaded India in the 11th century. I mean, I thought Hindus invented arithmetic? https://t.co/CCuKFQoePq

Independent journalist Rana Ayyub had also pointed to “the normalisation of hate which is letting this celebrity chef get away with using such vile, provocative language against a community”.

Kochhar runs several restaurants in the United Kingdom, Madrid and had one in Dubai’s JW Marriott too. He has since deleted the tweet, noting that “there is no justification for my tweet, a major error made in the heat of the moment on Sunday.  I fully recognise my inaccuracies that Islam was founded around 1,400 years ago and I sincerely apologise.  I am not Islamophobic, I deeply regret my comments that have offended many.”

There is no justification for my tweet, a major error made in the heat of the moment on Sunday.  I fully recognise my inaccuracies that Islam was founded around 1,400 years ago and I sincerely apologise.  I am not Islamophobic, I deeply regret my comments that have offended many.

Kochhar later issued a more detailed statement to “apologise unreservedly to my Muslim friends, the Islamic community and everyone” he had offended.

His contract with the award-winning restaurant has now been terminated after many people brought his bigoted tweet to the notice of the famous hotel chain, and also filed complaints with the Dubai Police.

The hotel wrote in a statement: “At the JW Marriott Marquis Hotel Dubai we pride ourselves on creating a culture of diversity and inclusion for our guests and associates across the hotel and our restaurants. We also remain committed to delivering the traditional culinary experience and high service standards that Rang Mahal is renowned for.”

Kochhar has, meanwhile, told the media that termination is “deeply upsetting” but he has accepted the hotel’s decision with “great pain,” adding that his “friends and well-wishers in Dubai will forgive” him and “continue to support” him.

Some Indian TV channels have already lapped up the issue, asking if he was targeted because he is an Indian (he is now a UK citizen) for a “very legitimate tweet” that questioned the “Islamic terror that many do not want to openly talk about”. These channels are further claiming that India has long been a victim of Islamist terror.

What is important to highlight here is that although Kochhar has no qualms offering beef and other non-vegetarian dishes in his restaurants, neither is this the first time that he expressed his prejudices on the microblogging site nor is he the only one. He had earlier termed the reservation policy of India the “single largest obstacle” before the growth of the country, mocked Rohingya refugees in India while celebrating the World Refugee Day with a special menu in England, and objected to The Telegraph putting Indian Muslims on the front page.

More importantly, his tweet is just another instance of the hatred spread on social media by Indian expatriates. What is surprising is that despite earning a living in Muslim-majority MENA countries, many of them carry visceral hatred for Islam and Muslims due to their prejudice and the vilification of Indian Muslims who they grow up with. They imbibe the hatred from a very young age.

In April 2017, Alpha Paint, a Sharjah-based company, had fired an employee who hailed from Kerala after receiving complaints that he had abused journalist Rana Ayyub on Twitter.

Only last week, Abu Dhabi-based Target Engineering terminated the contract of a worker for uploading a video in which he threatened to kill Kerala CM Pinarayi Vijayan and rape his family members. The company had said, “The action was taken in keeping with our company policy which has zero-tolerance for such behaviour.”

India tops the list of countries that receive remittances from abroad — it earned nearly 65 billion USD in 2017, according to some estimates. The bulk of such remittances comes from gulf countries.

About 8.9 million Indian migrants live and work in the middle-eastern gulf — that is more than half of the total 16.59 million expatriates. The UAE has the largest number of Indian migrants at 3.31 million, followed by Saudi Arabia that hosts 2.27 million from the country.

A substantial number also make up the population in Oman (1.2 million), Kuwait (1.16 million), and Qatar (6,91,000). Most of them are engaged in blue-collar jobs, but many Indians have made it big and are successful businesspeople in the countries.

For decades, those from the Indian diaspora have acted as torchbearers of liberalism and presented themselves as champions of liberty and freedom. However, increasingly, there appears to be a role reversal and these are troubling signs.

The influence of the Congress – considered more centrist – has dwindled over the years. The Overseas Friends of the BJP, the official international arm of the ruling Bharatiya Janata Party (BJP), has simultaneously risen.

The rightwing Hindutva brigade’s footprint has steadily grown abroad among the Indian diaspora. The parent organisation of the BJP, Rashtriya Swayamsevak Sangh (RSS), is reported to have spread its shakhas in more than 39 countries.

The Non Residential Indians (NRI), as Indian expats are called in India, have become a major source of funding for political parties in the subcontinent. In its initial days, Aam Aadmi Party (AAP) too had tried to tap into their potential but the BJP has gradually hijacked its agenda as Prime Minister Narendra Modi remains the singlemost popular leader for the diaspora.

Many of them are also part of what is known as the social media troll army of political parties, most importantly of the BJP. The saffron party has smartly used them in moulding public opinion abroad as well as back home, although most of them are not directly associated with the election process.

That explains why PM Modi makes it a point to address the diaspora in almost every country he visits. It is for this reason that Rahul Gandhi sought to revive his political fortunes by attempting to connect with the diaspora.

Deep-seated prejudices against Muslims among educated Indians, including those living in gulf countries, is the manifestation of the very problematic national identity that Indian intelligentsia has pedalled for long, and was lapped up by political parties.

Exposing them by using legitimate means can be a good way to challenge them, but unless political narratives vis-à-vis Muslims change, it will have little impact on the ground.

#Islamophobia, #Hindu terror, #Priyanka Chopra, #Atul kochhar
The views and opinions expressed in this article are those of the authors and do not necessarily reflect the official policy or position of DailyO.in or the India Today Group. The writers are solely responsible for any claims arising out of the contents of this article.