DailyOh! Why Tripura DM thrashed a groom, to the greatest broadcast in TV history

Tripura West DM was seen dragging a groom and priest by the collar in Agartala city for violating the Covid night curfew order.

The past few days we have been opening with grim and grimmer news. Today, however, started differently. We first want to share something with you that warmed the cockles of our hearts.

When a calamity strikes, humans are capable of rising over religion and embracing humanity as the biggest religion. This stands proven as a group of young Muslim men performed the last rites of their Hindu brethren who were Covid victims, while observing Ramzan in Lucknow. Most of these victims did not have family members in town to perform the last rites, or the family members themselves were unwell. Another Muslim man travelled 400 km to Prayagraj to perform the last rites of his Hindu friend who died due to Covid. Kudos to these people, who have not only won over the internet but also our hearts. As we said, this is not about a community, religion, caste or gender. It is about all of us. It is about humanity. Now, to the big story. The Covid story.

THE WORLD STEPS UP TO HELP INDIA

Staying with the spirit, not just communities, but nations are standing up for one another during this crisis. While on the one hand, the first batch of the Russian Covid vaccine — Sputnik V — will be imported and made available in India from May, PM Modi has had a "fruitful conversation" with US President Joe Biden about the prevailing Covid-19 situation in the countries. The two leaders spoke to each other over a telephonic call on Monday evening. First to the vaccine, and then to the conversation. Sputnik V vaccine was given emergency-use authorisation by Indian authorities earlier this month. In an exclusive interview with India Today TV, Deepak Sapra, the CEO of Dr Reddy’s Laboratories, has said that after the first batch of the vaccine is imported from Russia, the supply will be ramped up as the Indian manufacturers will start delivering. He said that six manufacturing units have been selected for producing Sputnik V in India. 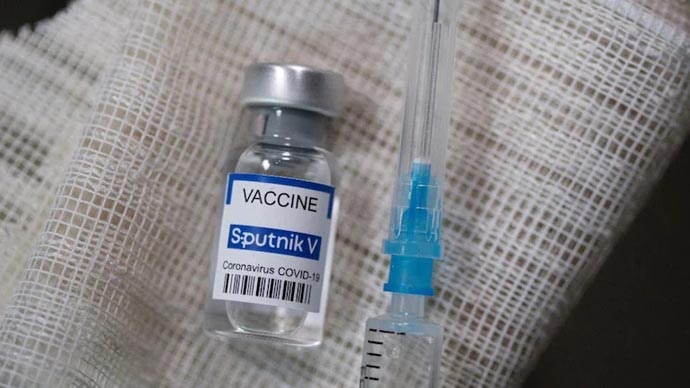 Now, to the conversation. PM Modi and President Biden “underscored the importance of smooth and efficient supply chains of vaccine raw materials and medicines. India-US healthcare partnership can address the global challenge of COVID-19”. PM Modi tweeted to inform his followers about the same Monday.

Had a fruitful conversation with @POTUS @JoeBiden today. We discussed the evolving COVID situation in both countries in detail. I thanked President Biden for the support being provided by the United States to India. 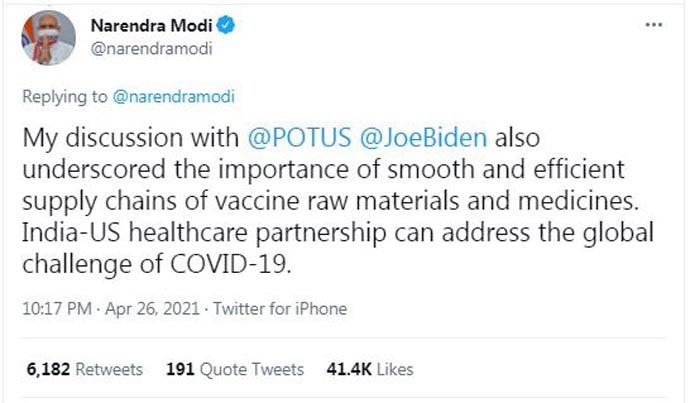 This brings us to our Word of the Day — conversation. The dictionary defines conversation as a talk between two or more people, in which news and ideas are exchanged. The word comes from the Old French word of the same spelling, which translates to ‘the manner of conducting oneself in the world’.

When you have a conversation with someone, you listen closely and respond appropriately. A proper conversation is an exchange of ideas and not just people waiting for their turn to talk. How many times have you felt heard, satisfied, and more informed after a conversation? Each conversation that makes you feel that way is a good one.

While the Indian PM and US President have had a fruitful conversation, a safe conversation has to be a virtual conversation in this age of social distancing. You don’t need to take our word for it. The government has said that if social distancing is not maintained, one Covid patient can infect 406 people in 30 days. A conversation can be had only if there are two or more people. If one person goes around infecting hundreds, he or she would be left with none to converse with. So, for your own sake and that of the society and the world, maintain social distancing. WHAT HAPPENED IN COURTS

Perhaps to ensure social distancing, or after being pulled up by Madras High Court yesterday, the Election Commission has now banned all victory rallies after the Assembly election results are announced on May 2. Not more than two people will be allowed to accompany the winning candidate to collect their certificates. We can only hope that those who win and those who are accompanying the winners wear their masks (properly) and ensure social distancing. 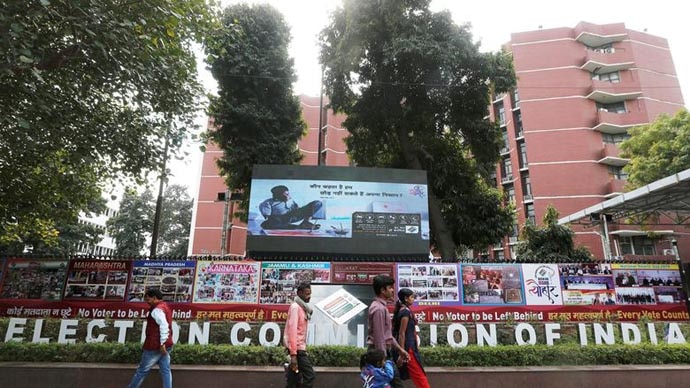 Election Commission has now banned all victory rallies on May 2. (Representative photo: Reuters)

While the Madras High Court castigated the EC good and proper, the Supreme Court is not too far behind. The apex court has asked the Centre if it has a national plan to handle the Covid crisis and whether the Army and paramilitary forces will be used. Not the one to just ask questions and reprimand, the SC has offered to coordinate efforts between states, as the high courts were in a better position to monitor situations in individual states. Hearing the suo motu case on the Covid crisis, the apex court further added that it will not sit quietly during the crisis. "It is necessary for the SC to intervene for coordination of the national effort. At the time of a national crisis, the SC cannot be a mute spectator," the SC said. Spoken like a true leader in times of crisis. SC spoke like a true leader in times of crisis. (Photo: Reuters)

The enormity of the situation cannot be undermined in any way. Delhi has been scrambling for oxygen for days now, as patients are dying in droves of respiratory distress. Fed up with the lack of oxygen and harangued by ailing patients, hospitals in the national capital have slammed the Delhi government over oxygen supply. On Tuesday, Shanti Mukund Hospital in Delhi ran out of oxygen and told the Delhi HC that their oxygen allocation has been reduced. The HC, meanwhile, has asked the Delhi government to act against black marketers and oxygen refillers who are refusing supply. The world is not black and white. While we have people rising above barriers to help those in need, we have people trying to profit from another human’s suffering too. The hospitals in the national capital have slammed the Delhi government over the lack of oxygen supply. (Representative photo: PTI)

However, some respite arrived on Tuesday morning in the form of the first Oxygen Express train, carrying 70 tonnes of medical oxygen. We hope that eases the situation a little bit. Social media and other platforms, meanwhile, are still inundated with desperate pleas for help.

And this is probably why state after state has started imposing restrictions, curfews and constraints on people’s movements. After Karnataka announced restrictions yesterday, the Assam government has announced a night curfew from 8 pm to 5 am with immediate effect. The curfew will remain in place till May 1.

Night curfew declared in Assam from 8 pm to 5 am in view of the rapid increase in Covid cases in the state. #COVID19India #IndiaFightsCoronaTogether pic.twitter.com/GOx71bIgjF 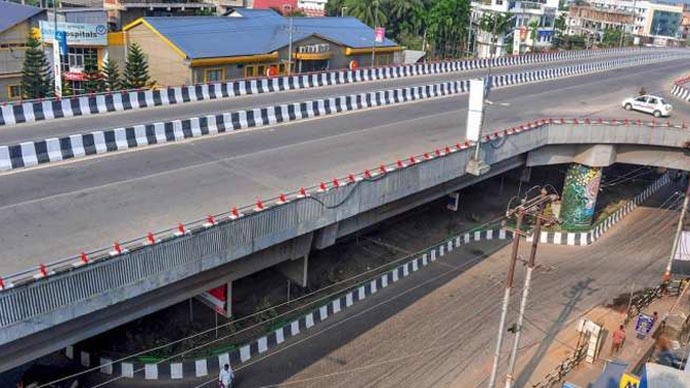 However, is it enough to contain the spread? The government thinks so as of now. We will know for sure on May 1. To give you a round-up of the Covid tally, Assam has 10,571 active cases as of Tuesday, and the numbers are rapidly increasing according to the government. The national count, meanwhile, stands at over 3.23 lakh fresh cases and 2,771 deaths in 24 hours since Monday. And beware if you are even thinking of flouting the lockdown.

If you have an authority in your area like this District Magistrate, you could end up in some serious trouble. Tripura West DM Dr Shailesh Kumar Yadav ordered the closure of two marriage halls in Agartala city for violating the night curfew order to contain the Covid spread. However, he did not stop with that. Yadav was seen dragging the groom and priest by the collar. He ordered the police to arrest the bride, groom, and their family members. While weddings and gatherings are much needed for good times, tough times call for tough measures. Kudos to DM Yadav.

A BREAK FROM THE GLOOM

It is time to boost your immunity by consuming this paste that we recommend to you today. Of course, the most important part — and we cannot stress enough — is to stay safe at home.

It is not just you who is glum after seeing such morbid numbers. The Oscars 2021 recorded the lowest-ever TV ratings as the viewership dropped to below 10 million. We don’t blame the viewers, who are perhaps battling a worse crisis in the form of Covid to bother themselves with Academy Awards that used to be the second most-watched television programme once upon a time.

This is despite the fact that the first moonwalk took place in the middle of the night in Europe and it was not broadcast in most of the Eastern Bloc. Remember that this was the time when most of the developing world did not even have access to a television set. Of course, now we not only have television sets but also live streaming. So what should you be streaming or watching today? The religion that brings together half the world — cricket. In the Indian Premier League (IPL), the Royal Challengers Bangalore (RCB) will take on Delhi Capitals (DC) today at Ahmedabad tonight. While RCB are still licking their wounds after a bitter loss against Chennai Super Kings (CSK), Delhi Capitals would like to clinch another victory after a nail-biting super-over win against Sunrisers Hyderabad in their last game.

So, beat the stress and gear up for a great match this evening. You can track the match and all the action live here.

We will be back tomorrow. Stay safe and stay happy.

#Apollo 11, #Modi biden, #Sputnik-v, #Coronavirus vaccine
The views and opinions expressed in this article are those of the authors and do not necessarily reflect the official policy or position of DailyO.in or the India Today Group. The writers are solely responsible for any claims arising out of the contents of this article.