The health ministry tried, and very miserably failed to teach us about depression

Get creative, think positive and do yoga! Yeah, no.

“Beta, tum subah jaldi utho, naashta karo. Life apne aap set ho jayegi (Son, start waking up early in the morning and having breakfast. Your life will get sorted on its own soon).”

This small punch from a stand-up act — comedian Abhishek Upamanyu was talking about advice he’d received from his father — seems to be the essence of what India’s ministry of health bases its ideas of mental health on.

On June 26, the health ministry's Twitter account tweeted an infographic with the caption: “Depression is a state of low mood that affects a person's thought, behaviour, feeling and sense of well-being. One must take up activities that keep him or her boosted in order to cope with depression.”

Aside from completely forgetting to mention that this state of low mood is a serious (and common) mental illness, the image offered coping methods that were problematic to say the least: Follow a routine, travel, be creative, take multivitamins, think positive, go for walks, eat fruits, sleep for a minimum of eight hours, stay clean and, last but not the least, practise yoga. 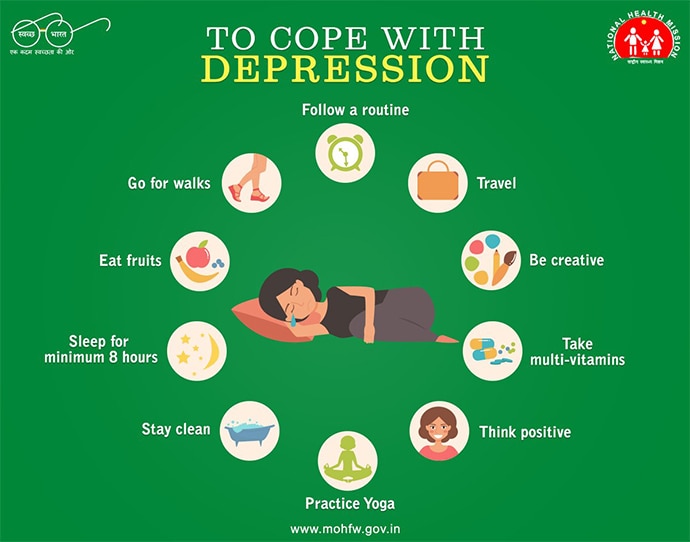 Basically, two gaumutra shots and one puja short of what a WhatsApp forward would suggest how depression is to be tackled.

This isn’t the first time the health ministry has gotten caught in such a gaffe. But let us ignore, for a little bit, that this post makes no mention of therapy, psychiatric help, and even medication (unless you count the multivitamins), something that provides 80 to 90 per cent of people with relief (or, as medical professionals now like to call it, remission from symptoms). Let us focus on all the other things that are supposed to help one cope with depression.

Following a routine, according to writer and journalist Sandhya Menon — who has been diagnosed with borderline personality disorder and bipolar affective disorder — can be extremely tricky for those who suffer from depression.

She wrote on Twitter: “Follow a routine — great advice. Do you know when a depressive person can do this? When they have had medication and therapy enough to have the will to get out of bed,” adding, “A simple dipstick survey would have told you that the number one complaint most depressives have is that they cannot follow a schedule or a routine when they are at their worst. That they can't even get out of bed to brush or bathe or even eat.”

Yes, it is true that a routine, a purpose, helps those who suffer from depression. But it is not a sure-shot way to cope. The problem with mental illnesses is that it is extremely difficult to have a generalised solution. Different people react differently to situations and what works for one or even many may just not work for some. In a similar vein, yoga, meditation and working out are all things that can help. But they may just as well be absolutely ineffective.

Travelling to cure depression needs little explanation; a 2017 webcomic by Hector Janse van Rensburg, who goes by “Shitty Watercolor” on Reddit and Twitter, explains how travelling affected his depression — it did not. And “be creative” sounds more like advice from someone who took the story of Ranbir Kapoor’s 2011 film Rockstar a little too much to heart. Did the person, who made the infographic, figure that since no one is seeking help to cure their depression, they might as well milk some angst-filled art/music/writing out of the whole deal? We may never find out.

Of course, the really problematic coping mechanism provided in the image is “thinking positive,” and that is where the crux of the problem lies.

Depression, unlike what many in India continue to believe, is very different from sadness and grief. Depression is a proper sickness that may either be caused by differences in the balance of certain chemicals in the brain, or can be a genetic trait, or can be affected by one’s personality, or simply be the result of one’s environment — abuse, neglect, etc. Depression, according to a UN study on India, can also have social and economic factors.

Thus, when you ask a person who suffers from depression to think happy positive things, it is like asking a legless person to wish their limbs back. It just doesn’t work that way. You can’t wish a disease away, no matter how much you are told otherwise.

A 2015 World Health Organisation study, titled “Depression and Other Common Mental Disorders — Global Health Estimates,” found that over five crore Indians suffered from depression, which was roughly 4.5 per cent of the population. Even Prime Minister Narendra Modi acknowledges this problem. In 2017, Modi, in an episode of his radio show Mann Ki Baat said: “We [in India] are afraid to talk about it [depression] openly,” adding, “I want to tell my countrymen, that depression is not incurable. There is a need to create a psychologically conducive environment to begin with.”

The reason why even Modi has had to mention this is that there is a huge stigma around mental illnesses in India. People are judged for seeking help from mental health professionals. People in India are regularly taught to suppress their feelings, which may well lead to symptoms of mental illnesses. That we have to be told by a conservative prime minister that mental health has to be taken seriously is indicative of how severe the problem is.

Yet, when the health ministry posts things like these on social media, it largely reinforces the misconceptions about depression that are already very prevalent in our society. By not talking about the need for professional help, for medical help, the health ministry is setting a poor standard for all. This is not, of course, to say that medication and therapy works for everyone. Or that everyone should go for medication and therapy. Like all other forms of treatment or “coping”, therapy or/and medication may or may not help.

But to not present it as an option makes it seem like there is no need for such a thing at all.

Talk to those around you, those who suffer from depression, bipolar disorder or any other and any number of mental illnesses, and ask them how their family reacts. More often than not, sadly, you’ll find them saying that they’re asked to “get over it”, or the kinder but equally useless, “try and be happy”.

If the health ministry can appear to believe that fruits, sleep and positive thoughts can cure depression, then maybe it is time to stop acknowledging the central body. Ignorance, after all, is a deadly disease.

Post your comment
#Narendra Modi, #Mental Health, #Health Ministry, #Depression
The views and opinions expressed in this article are those of the authors and do not necessarily reflect the official policy or position of DailyO.in or the India Today Group. The writers are solely responsible for any claims arising out of the contents of this article.