"Pravda", the Russian word for truth had, throughout the 20th century, carried heavy irony on its shoulders. It was the name chosen for Russia’s most popular newspaper during the Soviet regime, serving a readership of almost 11 million in its heyday. On the day Pravda was discontinued in 1996, an obituary for the daily in The New York Times read: “Lies were the special talent of the Soviet leadership, and as its official mouthpiece, Pravda was the best showcase for that talent.”

Yes. The newspaper, founded by Vladimir Lenin and his Bolshevik comrades in 1912, was a government mouthpiece. “Propaganda was Pravda's business, and before the fall of Communism business was always good,” wrote Michael Specter for NYT. The paper has been dead for more than two decades now, but the word — the “truth” — continues to bear its legacy of irony. Only, instead of a Communist regime, it will now be  attributed to a capitalist billionaire who has managed to create a cult around his legend: Elon Musk.

On May 23, Musk — founder, CEO, and lead designer of SpaceX; co-founder, CEO, and product architect of Tesla, Inc.; co-founder and CEO of Neuralink — the man who has dreams of colonising Mars, went on a Twitter rant. He wrote, "The holier-than-thou hypocrisy of big media companies who lay claim to the truth, but publish only enough to sugarcoat the lie, is why the public no longer respects them," adding: "(The) problem is journos [sic] are under constant pressure to get max clicks & earn advertising dollars or get fired. Tricky situation, as Tesla doesn’t advertise, but fossil fuel companies & gas/diesel car companies are among world’s biggest advertisers."

And before one could begin to wonder why Musk sounded awfully similar to Donald Trump tweeting at midnight, he unveiled his newest, wildest idea: "Going to create a site where the public can rate the core truth of any article & track the credibility score over time of each journalist, editor & publication. Thinking of calling it Pravda..." 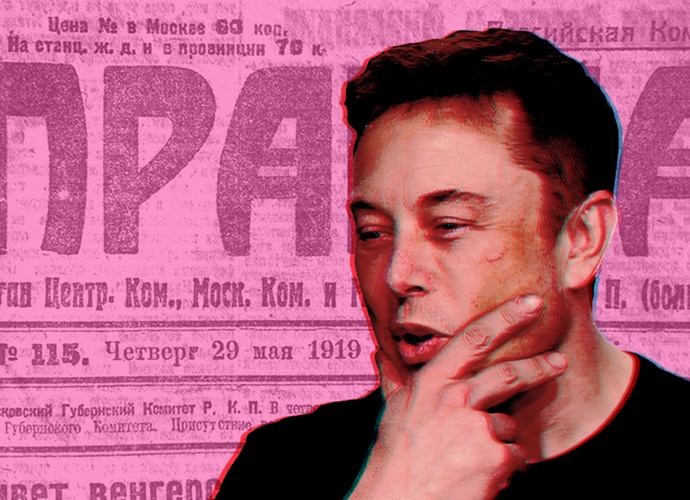 Does Musk care for the truth? [Photo: DailyO]

Musk’s dyspeptic demeanour and his resentment towards the media work the same way as that displayed by Trump, or for that matter, the leaders of India's ruling Bharatiya Janata Party. He doesn’t like reading unsavoury comments written about him, no matter how authentic or accurate they are. And Musk has been at the receiving end of a whole lot of bad press of late.

In this instance, it was triggered by an Electrek report stating how negative press about Tesla crashes and Model 3 delays may have affected the company’s stocks. Of course, Musk’s anger was, perhaps, directed more towards an in-depth report from investigative portal Reveal.

Titled “Tesla says its factory is safer. But it left injuries off the books,” this extensive report — more than three dozen current and former employees and managers were interviewed and hundreds of pages of documents were reviewed — details how Musk’s ambition and vision comes at the cost of his employees and that Tesla, for all its world-saving vision has “put workers unnecessarily in harm’s way”.

Not just that, the report also highlights how the company systematically undercounts injuries by mislabeling them — considered felony.

Musk has also been having issues with unions. United Automobile Workers (UAW), a US-Canadian labour organisation, which is reportedly trying to organise Tesla’s Fremont assembly plant, drove Musk to another meltdown recently, where he suggested that the UAW “drove GM and Chrysler to bankruptcy” which led to the loss of more than 2,00,000 jobs, harming the “people they were supposed to protect,” and how the organisation “destroyed once great US auto industry”.

In fact, a Tesla spokesman accused the Reveal report of being a tool in an ongoing unionisation drive and portraying “a completely false picture of Tesla and what it is actually like to work here”.

Musk, the man who rejects Facebook, wishes to be mankind’s saviour through eco-friendly cars, wants to liberate millions of consumers from the tyranny of the electricity grid by bringing power generation to the home itself with its “game changing” home battery, wants to revolutionise intercity travel and urban landscape through the “Hyperloop”, for all his accomplishments displays the petulance of a child denied his ice cream.

Of course, crying oneself hoarse over a “biased” media is one thing. But what Musk is effectively trying to pull off here, as April Glaser of Salon points out, is gaslighting the media. While the term usually defines manipulative behaviour to make someone doubt their own sanity, in this case, it can also works as a means to deflate an unflattering story by making it about the people who reported it.

Glaser writes, “Instead of responding to the press on the merits of its reporting, he’s asked his followers to place their faith in him,” and that is where things begin to get more problematic. Musk is only as concerned about “Pravda” as Donald Trump: he isn't.

What he cares about is his profits, his power and his cult.

And Musk's cult extends beyond his almost 22 million Twitter followers. They worship him. To them, he is infallible. His anodyne philosophy and projected altruism blinds them to a trajectory that would otherwise seem fit for a Marvel villain's origin story.

And if he wants to start a company where his followers rate news organisations, editors, journalists and stories according to their whims instead of objectivity — and Musk is quite possibly serious about this considering his agents incorporated a "Pravda Corp" in California in October 2017 — how does one suppose that will turn out?

Back in 2017, Facebook, in a desperate bid to rid itself of the pestilent fake news menace, introduced a similar mechanism. A flagging system, which would tag posts as “disputed by third-party fact-checkers”, proved more or less ineffective. It was soon taken down. But not before it raised a few serious questions, not just about what the meaning of fake news is — one can argue that its definition has been kept intentionally vague for vested interests — but also if merely a rank or tag is enough motivation for people to reject misinformation.

More importantly, in today's intensely polarised world, letting the news-consumer rank a website or a journalist, based on their biases is only another way to create an echo chamber. Pravda, if realised, is neither likely to curb fake news nor is it likely to change people's mind about the “media”.

What it will however accomplish is further deifying Musk in the eyes of his fans and followers, who he seems to have entranced with visions of a futuristic Jetsons-like libertarian utopia, where he saves humanity from the mutiny of artificial intelligence.

Socialist writer Paris Marx, in his Jacobin essay, argued that out of all wealthy tech CEOs of Silicon Valley, Musk is the worst. He reasoned that Musk, a snake oil salesman, exists only to further his own cause (profit maximisation) under the garb of a modern messiah.

With all that has gone down, one has to wonder if Musk, the supposed messiah, is really just another false prophet labouring under a crazy amount of God complex.