A murder is a murder. The accused’s ‘consuming beef’ or ‘stealing cattle’ does not make the crime any lesser.

The lynch monster has struck yet again, this time in Jharkhand. Two men were beaten to death in the state’s Godda district on June 13 by villagers who suspected them of stealing cattle. The incident comes barely a month after a similar crime in Madhya Pradesh, where a tailor was killed and his companion thrashed over “suspicions of cow slaughter". 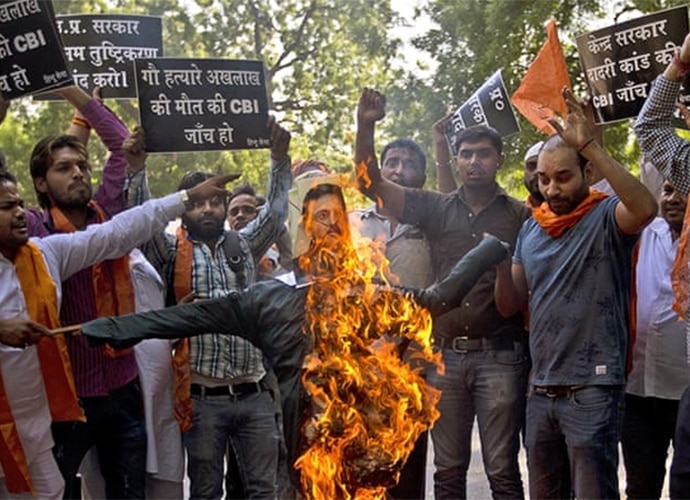 Mother of all holy causes: There is a strong narrative that paints gau rakshaks as warriors 'fighting for their mata'. Photo: PTI

However, some stark facts stand out — many of these cases have centered around cows, the victims have often been Muslims, and the action from the administration, across states, has been less than adequate, putting in the dock the governments of the respective states, and at the Centre.

The assaulters’ grievance, of gau mata being in danger, has been granted legitimacy, and the victims have been painted with the brush of guilt — at least a part of the blame falls on them too.

When Mohammad Akhlaq was killed by his neighbours in September 2015 because they “thought the meat in his fridge might be that of a cow”, the UP police arrested some alleged assaulters, but also sent the meat for testing. Akhlaq’s family was booked for cow slaughter, though later, the police said no evidence for this could be found. The 20 people booked for assaulting him are out on bail.

Ten months after a dairy farmer Pehlu Khan was beaten to death by cow vigilantes while transporting cattle in Alwar in April 2017, the Rajasthan police, unable to nab his murderers, branded him a cow smuggler instead.

In the Madhya Pradesh case in June, the deceased and his companion were booked for cow slaughter — based on “a verbal assessment by a government doctor that the meat may be beef”.

In the Jharkhand case too, “unidentified men” have been booked for stealing cattle.

This seguing of murder with cow slaughter in the same breath wins the assaulters immediate sympathy — after all, they were “provoked” into violence by the victims, who had apparently transgressed.

In fact, the term “lynching” to describe such cases — which are murder, no less — is in itself flawed: to lynch is to dispense mob justice for a presumed offence. When the media, the law agencies, the government, continue to use the term for these cases, the assumption of the offence remains. Injury upon assault. After Mohammad Akhlaq was killed, his bereaved family was booked for cow slaughter.

The rate of increase in such cases is telling — according to data compiled by IndiaSpend, 70 cases of cow-related violence were reported in India since 2010.

Sixty eight of these occurred after 2014, when the BJP government came to power.

We know the BJP likes the cow.

In fact, “protection of cow and its progeny” was part of its 2014 Lok Sabha polls manifesto. The party cannot escape the charge that its gau mata-Hindu pride rhetoric before every election has a role to play in the “gau rakshak dals” sprouting across the Hindi hinterland, in thousands of men being convinced that the cow is in danger, and it was their noble duty to take up arms in her protection.

However, the more dangerous trend is when this ideology seemingly seeps from the poll pulpit into the working of the government, when MLAs and ministers throw their weight behind the accused, when chief ministers fail to commiserate with the victims, or even condemn the incidents.

In the immediate aftermath of Pehlu Khan’s murder, Rajasthan home minister Gulab Chand Kataria had declared that Khan belonged to a “family of cow smugglers”, while Minister of State for Parliamentary Affairs Mukhtar Abbas Naqvi had said in Parliament that no such incident took place at all. Seeking answers: Pehlu Khan's family does not know who killed him, but has been informed he was 'smuggling cattle'.

After Mohammad Akhlaq’s killing in UP’s Dadri, BJP MLA Sangeet Som had addressed a rally there in violation of prohibitory orders, and said he would get the accused out on bail. After one of the accused died, his body was wrapped in the Tricolour, and Union minister Mahesh Sharma went to visit his family.

Minister of State of Ministry of Home Affairs, Hansraj Ahir, in July 2017 told the Rajya Sabha there was no need for a separate law to deal with lynching.

The Prime Minister, however, condemned gau rakshaks more than once, in no uncertain terms. Sadly, that seems to have dampened neither their morale, nor their menace.

Cow vigilantism cannot be allowed to become an accepted, acceptable phenomenon. It needs to be called what it is – murder – and the accused treated as such. The trend of victim-blaming only ensures the number of victims keeps increasing.