For Pakistani media, Nawaz Sharif's return is bigger news than killing of 128 people in Balochistan blast

The country's media went into a frenzy, giving minute-to-minute detail of the return of the former PM and his daughter Maryam from London.

On Friday the 13, in the month of July, in 2018, a bombing wreaked destruction rarely seen even in a country like Pakistan that has seen more than 60,000 terrorism-targeted deaths in the last two decades. In the Mastung district of Balochistan, targeting the election rally of the election candidate of PB 35, Nawabzada Siraj Raisani, of the Balochistan Awami Party, an unidentified man blew himself up, killing many and injuring even more. ISIS through its news agency Amaq has taken responsibility of the attack.

As per the last media reports, the number of casualties has reached 128, while that of the injured is more than 200.

The horrific bombing, said to be deadliest after the December 2014 Army Public School Peshawar terrorist attack, sent a wave of shock, grief and anger throughout the country that despite having seen so much destruction over years, and having an attitude of helpless and hopeless resignation, can never truly be apathetic to the devastation in an area that is already enveloped in an air of gloom and bleakness because of the lack of attention it receives in national governmental discourse. And in media.

There is an almost complete blackout of Balochistan on national media, and on Friday, that open secret became as clear as the midday sun. Balochistan does not matter, and lives of the Baloch are not more than a ticker under the transmission of something more important. That lives of the Baloch are just another statistic in the long list of nameless, faceless victims of terror in a Pakistan that has been fighting an internal and external war on terror for more years than many people would care to remember. That bodies of 100s of the Baloch bleeding, lifeless, seared, dismembered, unrecognisable, lying on top of one another, lying covered in blood and soot, making it hard to distinguish human from the inanimate do not deserve primetime coverage. That cries of people wailing for their loved ones are on mute while the media, breathlessly, endlessly, speaks about one subject.

On Friday 13, 2018, there was not much on Pakistani media other than news of the return of Nawaz Sharif, accompanied by his daughter, and his most trusted unofficial political adviser, Maryam Nawaz Sharif. After the July 6, 2018, conviction and sentence in the case of the Avenfield properties in London owned by Sharifs, Nawaz and Maryam — who were in London to visit the hospitalised wife of the former and the mother of the latter, Kalsoom Nawaz Sharif, undergoing treatment for cancer, and said to be in a critical condition — were returning to Lahore. 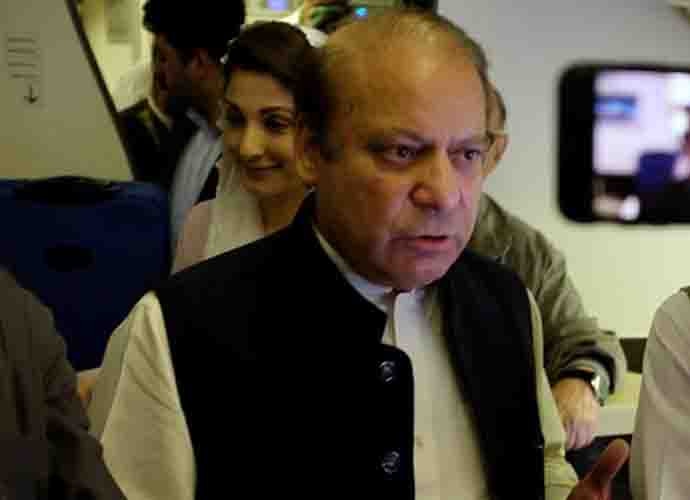 Accepting the reality of selective accountability, judicial overreaching, an ambiguous verdict full of legal loopholes, the alleged role of the establishment to weaken civilian institutions, alleged efforts to weaken the vote bank of the most popular political party of Pakistan, Pakistan Muslim League-Nawaz, alleged efforts to help Imran Khan-led Pakistan Tehreek-e-Insaf to win the elections, and curbs on freedom of expression of electronic, print and social media, the debate has to move beyond that. While political victimhood and martyrdom are an expected result of the shoddy handling of a case of corruption in which the Sharif family were unable to produce proper evidence that could prove the source of money used to buy expensive properties in the early 1990s in London, it is imperative not to look at them as poor victims of an unjust system.

With the background of immense material and political power, having served as the prime minister thrice, Nawaz Sharif along with his family is answerable to his nation, his voters, his critics, his supporters and his rivals. He is also accountable for all their actions that took place while in power. All elected leaders are. All military dictators who oust elected leaders are.

What happened on Friday was unprecedented. In a country with more than three decades of military rule, and a culture of dismissal and disqualification of elected prime ministers, it is no surprise that even legitimate cases are labelled political persecution, and most verdicts of courts are taken as nothing more than political witch-hunts. The Sharifs unlike general (retd) Pervez Musharraf — who on July 10, along with his wife has been summoned by the National Accountability Bureau to record their statements regarding an unresolved inquiry into "misuse of power and accumulation of assets beyond known means of income," and is ensconced in Dubai — faced the trial, and have returned to be jailed. The process of appeals will commence on July 16.

Pakistan media went into a mode of frenzy, giving minute-to-minute detail of the Lahore-bound Emirates flight from London. Acknowledging that it was an understandable reaction in a country where 99 per cent of the content on news channels is national politics, what was perturbing was the absence of the coverage of the terrorist attack that killed many, destroying hundreds of families, giving them lifelong pain of loss. Before the news of the attack, giving detailed and repeated information about the mile-to-mile tracked flight may have held interest for the PML-N supporters who were protesting the unfairness of the trial and sentence, or an occasion of jubilation of Khan-led PTI and other political parties, and millions of Pakistanis who cheered the system of accountability that doesn't spare even an elected prime minister. But that relentless coverage didn't even stop or pause when news of one of the deadliest attacks in the bloodied internal history of Pakistan appeared. The entire day the coverage focused on the Sharif flight and return, and all talk shows focused on that. Ratings matter, and the return of two privileged and powerful political leaders to be arrested on arrival to face imprisonment is TRPs gold. Accepted. But why didn't the deaths of 128 people in Mastung matter at all? Not even to divide the screen? Not even to give hour-to-hour if not minute-to-minute news of the situation on ground? Not even to give updated reports about the number of casualties, assistance needed for the wounded, status of emergency medical services, transfer of the critically wounded to hospitals, state of dead bodies, lying covered in their own blood and that of others? Not even to compile lists of bodies that had been recognised, and keep their names on screens to assist families away from the area of tragedy who may be looking for some news?

Not even to simply say to millions of the Baloch people that you are ours, and that we care? Not even to shows 100s of families that the unimaginably painful deaths of your loved ones matter to us more than the First Class return of two political leaders who know how to work the system to turn their conviction into a story of heroism and sacrifice? Not even to register as lip service that as Pakistanis lives of all Pakistanis matter to us?

The media blackout of political parties and speeches of their leaders is a favourite topic of the "outrage" machinery on all platforms of media. What it is: selective grief, selective anger, selective outrage. What it is: that protests are agenda-based, condemnation is only for issues that "matter", and criticism is only of what people deem important in their narratives of self-made fairness and justice. The almost-blackout of the Mustang tragedy is a stark reflection of who we have become as a nation, what we are as a society, what our values are. Soulless, without empathy, without pain, secure in our apathy, our agenda, our heartlessness.

Media is us. Let that sink in while you read these words. Without much thought, without truly caring, without really giving a f**k.

Post your comment
#Pakistan, #Maryam Nawaz Sharif, #Nawaz Sharif, #Balochistan
The views and opinions expressed in this article are those of the authors and do not necessarily reflect the official policy or position of DailyO.in or the India Today Group. The writers are solely responsible for any claims arising out of the contents of this article.