#MeToo is not a battle of the sexes. It's about agency of an individual

Women and men together will redraw the lines, remap the dynamics, and create a world that is safe, kind, attentive, responsive and empathetic.

In April 2013, on my first trip to India, I travelled to Delhi via Amritsar, and from Atari, K, a Sikh friend of my cousins in Lahore, picked me up to take me to the airport. The good-looking man with gorgeous green eyes, in his late 20s, took me to his house where I met his family, had food, and felt at home with a bunch of Punjabis, loud and cheerful like my own folks back in Lahore. This was to be repeated on my way back from Delhi four days later, and in December 2013, during my second trip to India to interview the then Jammu and Kashmir chief minister, Omar Abdullah.

In November 2013, my 18-month long op-ed editorship of Daily Times had ended, but being one of those wishful dreamers who want friendship between Pakistan and India, interviewing someone like Abdullah with his family’s long and deep personal and political history with Jammu and Kashmir made him the ideal person to talk to with the purpose of finding ways to move forward to break the icy status quo between Pakistan and India. Having been granted the interview, there was only one problem: where’d I stay in Delhi? That was solved by my friend K, who arranged for me to stay at the house of his friend, S, in Gurgaon. 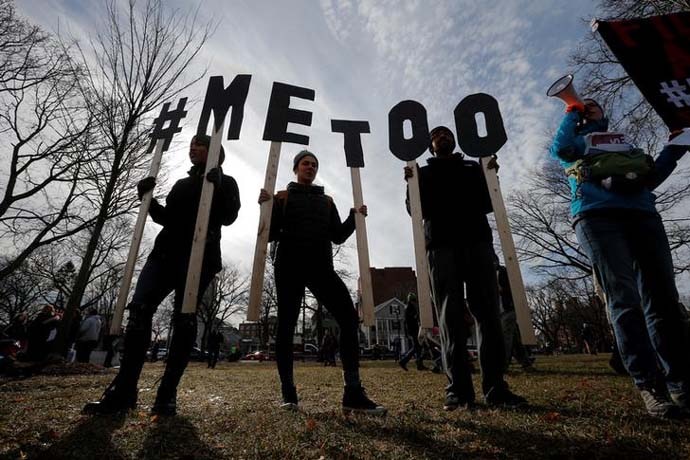 We are not out for retribution and revenge. (Photo: Reuters)

S was a tad older than K, single, and lived between his hometown (name: forgotten) and Gurgaon. I was his guest for six days, and the reason why after so many years I remember him is because of his gracious hospitality, and how he didn’t make me uncomfortable even for a moment when I had dinner with him, watched Dhoom 3 at PVR, hung out with him alone, and with his friends. Not one wrong gesture, not one inappropriate word.

And that has been my experience with all the Indians — male — that I interacted with during that trip and the next four in 2015 and 2016. I made some wonderful friends of both genders, and to date we remain in touch. Delightful women and men, and the latter, I emphasise, were all perfectly behaved, sweet, and always respectful, irrespective of the topic and the setting of the interaction.

Most men are aware of the invisible line that differentiates a friendly meeting from a potentially amorous one, smartly conscious of not blurring the distinction between a frank chat and a flirtatious one. Being in close proximity with a woman is not a licence to make a move, taking things from the friend zone to more, and those who stick to their side of the line, respecting your boundary even without being told, are the ones who reiterate your belief that decency and dignity are values that are not situational, gender-based, occasional, self-serving and cosmetic.

I’ve seen it all, and I’ve experienced it all: the bad gaze, the inappropriate touch, grubby hugs of lecherous uncles, sexual harassment, and physical violence. From victim to survivor, it has been a life-long journey, of fragmentation, loss, assessment, internalisation, evaluation, healing, mending, exorcism of ghosts, learning to live with those that can’t be exorcised, letting go, cathartic acceptance and moving on.

With my limited work experience, I’ve never had any workplace harassment, but the other kind followed me from my teens to my middle age. Men saying inappropriate things, crossing a line, turning serious conversations into awkward, one-sided flirtatiousness, asking personal questions, and hey-send-me-a-latest-photo line in the hope to take it to something more in the age of emoji-filled WhatsApp’ing of blurring the line between the right and the wrong every seventh text.

I laugh, I ignore, I roll my eyes, I reprimand, I insult, I delete, I block, I move on. 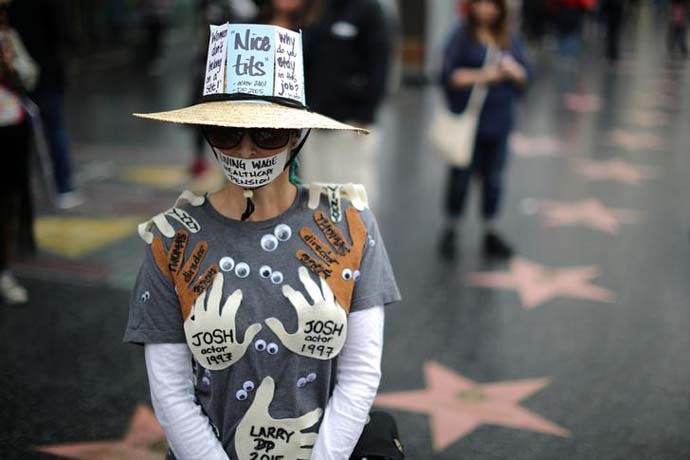 It is about what is right, what is acceptable. (Photo: Reuters)

Having been a social recluse for years, it’s easy for me to deal with what I don’t like: I don’t meet people who make me uncomfortable. But that privilege has come after a lifetime of experiences that made me acutely aware that despite things having changed, one thing remains immutable: men will be men. And having said that, it is in no way an endorsement or acceptance of a pattern of behaviour that has been used as a pretext to establish a system of male dominance, male entitlement, patriarchy, sexism and misogyny. Not all men are bad, not all men cross that invisible line, not all men without encouragement or permission touch, kiss, hug, grope, and do worse things. While many do, most don’t.

It is not a feminist issue. It is not the battle of the sexes. It is not about all men are evil and all women are angels. It is about what is right, what is acceptable, what is decent. It is about agency of an individual, a female in this case, in the current discourse of #MeToo that has opened many a wound, many a floodgate, many a debate.

Reading on my twitter timeline one account after the other of many females in India I can’t help but think: Thank God for social media, finally the voiceless has found a platform to open up, speak up, to ask for accountability, to hold their alleged harasser, assaulter, rapist, by the lapel of his wounded masculinity, and force him to face his victim.

Yes, it is imperative to understand that not all allegations are true, that some delayed allegations might be the result of a bad break-up or unrequited love, that some women relish the idea of watching innocent men squirm, or that it is a pursuit of misplaced fame or money. But beyond that...

It is the time of reckoning, of demanding answers, of seeking closure, of questioning the lack of responsibility and accountability. It is time to unmask the real face behind the suave persona, the sleazy words behind the sophisticated charm, the cover of intellectualisation on the vulgar, the ugliness carefully concealed in designer clothes and French colognes.

The MeToo of one individual has opened the door for countless females and even some males who for months, years, decades hid their pain in dark corners of their minds, trying to comprehend their own role in the enactment of the lewdness, crossing of lines, harassment and violence that was unleashed upon them. Questioning themselves, finding faults with their own actions, and trying to move on, they have finally spoken up. No more. Time’s up.

It does not matter when it happened. It is irrelevant why she is speaking now. It is immaterial whether she drank, had relationships, spent the night at someone’s house too drunk to drive home after a party, flirted, or had more male than female friends. It is of no consideration if she accepted a friend request, chatted with him online, engaged in flirtatious behaviour for five minutes, laughed at his bawdy come-ons, shushed his sexual innuendos, shouted at him, snubbed him outright, or went for dinner alone with him. This is about agency. This is about consent. Of a woman having the right to say NO as and when she wants. To snub. To stop.

Even when it is not verbal, a NO must be understood and accepted. To not be touched, to not be groped, to not have a tongue pushed in her mouth, to not have sloppy hands brush against her breasts “accidentally”, to not be hugged when her arms remain tightly wound around her chest. She shouldn’t have to say NO when the setting is of a workplace, the man is her boss, is double her age, whose eyes linger longer at her breasts in her t-shirt than on the words of the presentation she devoted hours to, and who makes her life hell when she rejects his inappropriate behaviour. It is time to say: enough. It is time to say: silence is not even an option. 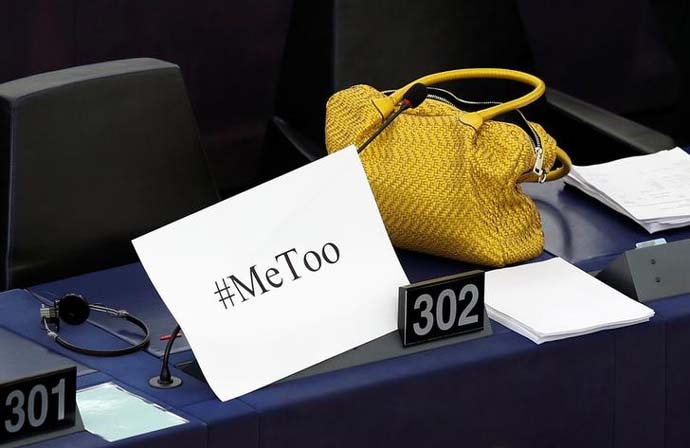 Women have suffered, in all their roles. (Photo: Reuters)

The entire edifice has to be dismantled, reshaped and reestablished. The enabling; the endorsement; the complicity; the cover-up; the bro-code of it-is-no-big-deal; silence of some females who only speak in solidarity of the perpetrator; compartmentalisation of females in boxes of the good girl and the slut, marriage-material or the floozy to f**k, the sexy and the brainy; binaries of “good” and “bad” behaviour. The institutionalisation of a system of shaping a woman into the mould of the desirable. The reinforcement of the binaries of sexy and bahen-ji. The satiate-my-lust-and-you’ll-reach-places syndrome.

The system of non-verbal coercion and conditioning of the vulnerable to cater to lust and demands of the powerful, be it on a casting couch, during choreography of an item number, a professional endorsement, or an out-of-turn promotion. The age-old conditioning of female appearance as a tactic of what is desirable for the male: the perfect vital statistics, the oomph factor, the sexiness quotient. The yardstick of a woman’s success: fitting perfectly into the roles created by her patriarchal world. The perfect daughter, the prefect girlfriend, the perfect employee, the perfect wife, the perfect mother. The fitting into a box carved by centuries of overreaching patriarchy and amplified masculinity.

Women have suffered, in all their roles. Roles that are black and white, of goodness and badness, in all shades of grey, as the saint and the whore, as a star, as nondescript, beautiful, plain, at home, outside. Her suffering mostly remained smothered in silence, confusion, self-doubt and shame. Now she is saying to women around her, in other countries, all over the world: NO MORE. You are not alone, it happened to me too. We are not out for retribution and revenge. We just want answers, acceptance of the wrong done to us, responsibility, accountability, course correction, atonement, new ways, a new paradigm. Time’s up.

In Pakistan, in India, everywhere, women and women together will ensure their voices are not isolated, they’re not silenced, they don’t become entangled in whataboutery, deflection, lack of real evidence, attribution of false motives, slut-shaming, gaslighting, virtue-signalling, victim-blaming, blame-shifting and taking the wrong side. Women and men together will redraw the lines, remap the dynamics, and create a world that is safe, kind, attentive, responsive and empathetic. Not much will change right away, not much changes ever. But that is in no way a reason to give up, to not fight, to not speak, to not say NO, and to not say: you are not alone. Speak up, I am with you.

Also Read: To all who did not get their old self back, and to those who did

Post your comment
#Women Empowerment, #Sexual harassment, #Timesup, ##MeToo
The views and opinions expressed in this article are those of the authors and do not necessarily reflect the official policy or position of DailyO.in or the India Today Group. The writers are solely responsible for any claims arising out of the contents of this article.