MeToo: MJ Akbar, my friend whom I admired, and for whom I now have some advice

The editor-writer-politician was once an awe-inspiring figure.

I am shocked, like others, by what has been said and written about MJ Akbar in the media and on social networks. I am also perplexed! Why would he have done what he is alleged to have done and for so long? MJ Akbar has been hit by a series of serious charges. (Photo: PTI/file)

Akbar has filed a defamation case against Priya Ramani. Irrespective of the outcome of this case or other cases he might file, MJ has lost the case in the court of public perception. Will the court victory restore his credibility, his reputation, his status and standing? MJ’s strongest denials can’t possibly remove the widely held impression — if 20-odd women have made similar accusations, there is bound to be dal mein kuchh kala, as the adage goes.

The entire episode is like a big, expensive Bohemian crystal vase has been thrown off its pedestal by a strong gust of wind, reducing it to small pieces. No amount of painstaking efforts to glue all the pieces together could bring the vase to its original shape and beauty.

The Me Too movement should be welcome. It empowers women, considered weak — even helpless — for long. At least, the urban and educated women won’t suffer in silence any more — they are more likely to speak up, and take the masks off erring men’s faces, no matter how powerful they might be. All acts of sexual harassment and exploitation should be condemned unequivocally, thoroughly probed and the accused, if proven guilty, must be punished. 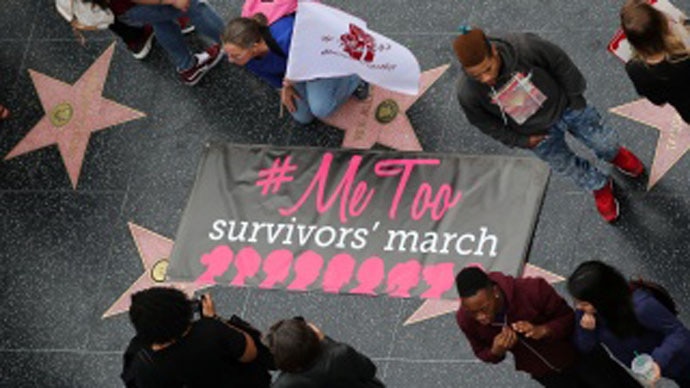 Hopefully, this movement will expand, in spite of defamation cases; predators will be mortified and the level of sexual harassment will come down drastically.

However, it is crucial that accusers must have irrefutable facts. It is actually naive on the part of a grown-up educated woman not to suspect some ulterior motive when called for a job interview in a hotel and not in the office, that too, in the late evening. In many cases, acute financial needs encourage young women to take risks, notwithstanding their own nagging suspicion. But isn’t it also true that many young girls, in a desperate hurry to climb up the ladder, unintentionally fall prey to those who promise to help fulfill their dreams?

I have been an admirer of MJ, the writer and journalist, for the last 30 years. His command on English prose is exceptional; a retired Foreign Secretary once told me that every line Akbar wrote read like a classical epitaph. His writing is marked by perceptive understanding and depth. Never short of courage, he could tear apart the mightiest with his sharp pen. The success of the publications he launched, both commercial and critical, made him an iconic figure. His books Nehru: The Making of India and The Shade of Swords established him as a serious writer of international repute.

He also flirted with politics; he won a Lok Sabha seat in Bihar (1989) on a Congress ticket given by Rajiv Gandhi. This heady mix — respected journalist, successful editor, internationally acclaimed writer and part-time politician — made him a celebrity of sorts in the Fourth Estate. At his peak, he was courted both by aspiring journalists and heavyweight politicians. 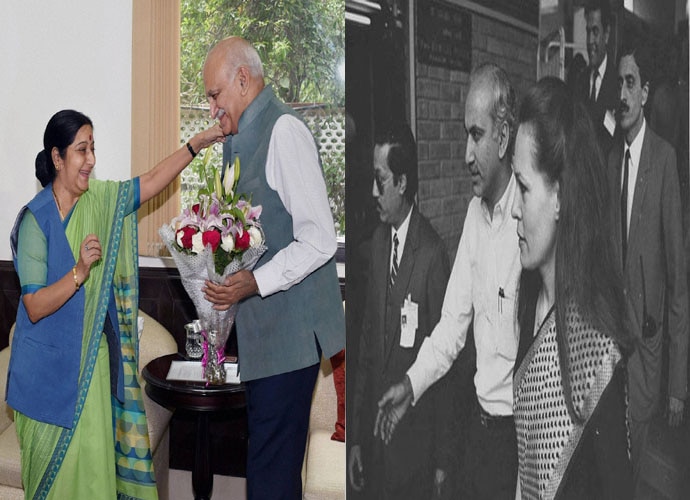 He was courted by top netas of all camps. (Photos: Twitter)

In August ’89, on his return from a week-long trip to India which we had arranged, the Chief Editor of the Times of London asked if he could do anything for me. I reminded of him Nehru’s birth centenary and asked if he could carry a full centre page op-ed on Nehru on November 14th. He instantly quipped: “Done! Just tell me who could write a balanced critique.”

Aware of the launch of MJ’s book Nehru:The Making of India in London a month back, I suggested MJ’s name. Emails hadn’t arrived then, so MJ faxed them 10-12 pages on Nehru. The article was carried uncut with their headline: Why Tanks will never roll on the Streets of Delhi? In contrast to the Tiananmen Square crackdown in Beijing, it was a tribute to Nehru’s role in nurturing and strengthening democracy in India.

In 2006, I invited MJ to Nairobi to speak on ‘Islam, Jihad and International Terrorism’ at a function jointly organised by Lions and Rotary Clubs. He opened his speech with a provocative question — Can you name the first Jihadi in the world? After a pause, he added — let me tell you: it was none other than our beloved Lord Krishna!

Most of the audience was aghast.

Then, he explained, at the battle of Kurukshetra, when Arjun was reluctant to pick up arms against his own kith and kin, Krishna, through his sermon, helped him address the doubts from within and exhorted him to perform his duty and fight for what was right. Jihad, in its pristine form, was a fight within to overcome one’s negative emotions and stand up for righteousness; it wasn’t killing innocent people. Present-day Jihadists who indulge in violence insult and defile the true meaning of jihad. His rational and persuasive arguments calmed the frayed tempers of the audience. MJ Akbar was famous for his speeches and arguments. (Photo: Facebook/MJ Akbar)

A month later, he phoned me from his hotel in Nairobi that he was on his way to Mogadishu, Somalia. A British journalist had been killed there a week before, so I strongly advised him to drop the idea, adding, “Anything could happen to you”. Brushing aside my concerns, he insisted this was the right time to be in Somalia; no Indian paper had reported from ground zero in Mogadishu; we would be first!

When I was the Dean FSI, 2007, I invited Akbar twice to speak to the newly recruited diplomats. He had strongly criticised the Civil Nuclear Deal, so some mandarins in South Block weren’t happy. I maintained, all Indian diplomats were duty-bound to defend government decisions, but they should listen to contrarian views too.

I was at the dinner at the residence of the Jordanian Ambassador with a dozen Ambassadors from the Arab world when the news of MJ’s sacking as the editor of The Asian Age was announced. It was greeted with disbelief. Most said they wouldn't read The Asian Age from the following day; for them Akbar was The Asian Age!

Many friends of MJ feel, in good faith, he should offer a public apology. That will be a gentlemanly redressal of his alleged indiscretions, proven or not.

Also read: Why MJ Akbar’s resignation is the first big victory for the MeToo movement