It's the stunning and caustic irony of our times that the fundamental aspect of our parliamentary democracy - the elections to Lok Sabha and the respective state Assemblies - are themselves under a coordinated attack from the powers that be. With the President of India Ram Nath Kovind, Prime Minister Narendra Modi, vice-president Venkaiah Naidu, and even the Election Commission batting for the latest panacea for all of India's ills - "simultaneous elections" - the conversation has naturally shifted to the feasibility of such a move. The BJP-led NDA (National Democratic Alliance) has always been in favour of "one nation, one poll", since the idea has been part of its 2009 and 2014 manifestoes. In fact, the love of the one, the singularity and centralisation thereof, is the overarching tendency in all the major ideas, planks, initiatives of the BJP, thoroughly supported by its ideological parent, the RSS, and the larger Sangh Parivar. Be it "Hindi, Hindu, Hindustan", or "One nation, one tax", or simultaneous elections, it's the desperation to impose unbearably undemocratic one-size-fit-all solutions that has been their hallmark for years.

It's therefore no surprise that LK Advani supported the idea in 2003, and guess what, he had the backing of then Opposition leader and Congress man Pranab Mukherjee. Surprised? Don't be. The commonality between Advani and the ex-president is both belong to big national parties with proven track record of authoritarianism. If a Congress government imposed the Emergency in 1975, the "undeclared Emergency" is our current reality under Prime Minister Narendra Modi.

PM Modi has been a consistent votary of simultaneous elections, and he has been pushing the idea through his once-in-a-blue-moon interviews with TV channels willing to indulge in the friendly fire. Even a parliamentary standing committee report and a Niti Aayog paper prepared by Bibek Debroy et al have etched out the reasons for "one nation, one poll". Broadly, those reasons are curbing government expenditure, time wasted due to imposition of model code of conduct, less distraction due to electoral compulsions, smoother governance, supposed focus on civic life, less stalling of infrastructure projects, more governmental accountability, and even less traffic and noise pollution!

Sounds like a win-win? Hang on, it's exactly the opposite case, in reality. In fact, simultaneous elections is a conceptual poison for India's federalism, democracy and republicanism, and also the spirit of constitutionalism. Each and every aspect of our multifarious parliamentary democracy, conceived as a Union of federal states, with no hierarchy and actually no "Centre" either, just a division of responsibilities, will be grievously injured and left to die a significantly traumatic institutional death, in case this "panacea" that the efficiency marauders are advocating with a passion is swallowed by Indians.

India is a federal country, which means each state - we have 29 of them - has its own government, which is elected to the Assembly, the state legislature, with an upper and lower house. Assemblies are not subordinate to Indian Parliament, they just have different responsibilities. Issues under Union and Concurrent Lists are Parliament's domain. Assemblies must legislate on most immediate issues such as healthcare, education, law and order, welfare schemes, among many other things.

Assemblies are diverse, because each of the 29 states are extremely different from one another, not just in terms of language, but in food habits, culture, religious demography, socio-economic realities, distribution of natural resources, population, etc. State elections are always about local needs tailored to the state's requirement. Precisely why regional parties have developed a strong presence in the last three decades, and have left a mark on the politics of states such as West Bengal, Uttar Pradesh, Bihar, Punjab, Jammu and Kashmir, Odisha, Maharashtra and Delhi. In fact, Telangana is ruled by Telangana Rashtra Samithi led by K Chandrasekhar Rao, a party formed because of the deep disenchantment with national parties such as Congress and BJP. Similarly, Trinamool Congress' formation is a response to the political sway of the CPM in Bengal, but also a break from the Congress party.

Simultaneous elections will critically injure the local immediacy of the state elections since the narrative will be New Delhi-centric, driven by national parties with pan-India presence seeking to maximise their territorial hold. Even though some regional parties such as TMC are deemed "national" for their strength in the Lok Sabha, the emphasis will shift towards Parliament away from the state Assemblies in this divided gaze.

While the simultaneity benefits huge parties with staggering cadre base, such as the "missed call party" BJP, with enormous financial resources and workforce, helped by the presence of the friendly sakhas in almost every state of India, how will a smaller party like Aam Aadmi Party, or even Samajwadi Party? In fact, parties with limited to little resources will be swept away in this game of managing narratives, with the media all too obliging to the Union government that is also making laws to obfuscate unlimited political funding by corporates in the name of transparency!

In the current context, under Modi-led NDA rule, states like Uttarakhand and Arunachal Pradesh saw their governments toppled mid-term, and even though the court rejected President's rule in Uttarakhand, the fear of being overturned in the middle, against the democratic mandate, would sky-rocket under a system of simultaneous polls. The idea of one nation, one poll would be defeated if polls are held again in case a government falls, and there's no alternative, pushing more and more states to President's Rule.

For example, the Election Commission's highly dubious disqualification of 20 AAP MLAs over "office of profit" would have toppled Delhi government had Arvind Kejriwal's party not have that stupendous majority - 67/70 - in Delhi Assembly. If this is the new normal, one nation, one poll is a poison pill to push more and more states under President's rule that is proxy rule of the Union government euphemistically called the Centre.

This is how the federal character of India is assaulted, one state at a time.

With changes in Income Tax Act in 2017, the spectre of tax terrorism, and the arm-twisting of "central" bodies such as the CBI, Enforcement Directorate, Income Tax department, etc is a new normal. The "fixing" of democratically elected governments by blackmailing leaders of political Opposition and governments in states that are not allies of the party in power in New Delhi is something that would become routine.

A good and foolproof system lessens the tendency to expand power of one organisation, political party and individuals in order remain a true democratic republic that is elected, representative governance of the people, by the people, for the people. A weakened Opposition only increased the authoritarianism - direct and indirect - of the party in power in the Union government, striking at the root of India's parliamentary, multi-party democracy that's still vibrant. 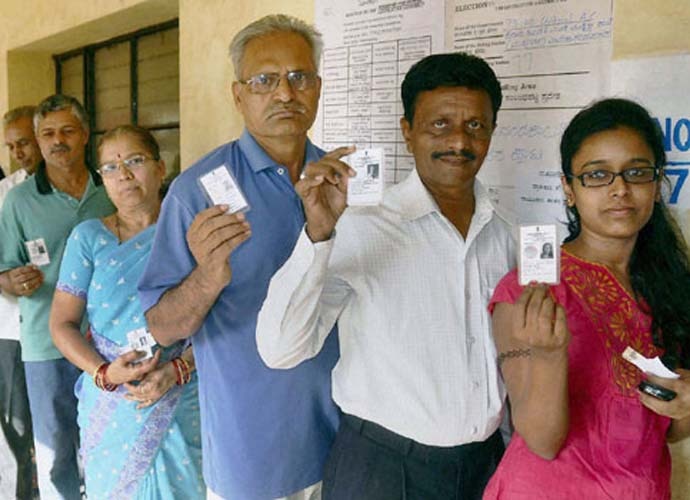 The twin and related argument of time wasted due to imposition of model code of conduct during various state elections that supposedly leads to stalling of development projects is a bogus one, like other points in favour of electoral simultaneity. Why? Because the model code of conduct only prevents new schemes from being announced as sops after it's imposed. Precisely why we saw announcement of dates for Gujarat Assembly polls delayed unceremoniously because PM Modi needed to shower sops worth Rs 11,000 crore on the poll-bound state in October 2017.

There is nothing to prevent the state government to carry out existing projects. In fact, if anything, the multiple elections improve accountability because the pressure is kept up through elections in different states, never allowing the narrative to fully settle in favour of one huge party, despite all the strings pulled from New Delhi, and the control-and-command centres that media houses obliging in setting the mood of the nation with frequent surveys that manufacture favourabilty and consent of such rigid electoral unitariness.

Why pay taxes when expenses are a problem?

Of the most facile arguments given in favour of simultaneous polls, is the one that says it would reduce the burden on government exchequer and lessen the expenditure. Seriously? Why do we pay our taxes if "expenses" are a problem for the government? In fact, "expanding the tax net" is a constant refrain in this country, even as the wealth and income gaps exceed the British Raj levels, according to French economist Thomas Piketty and also the Oxfam-Davos report 2018. 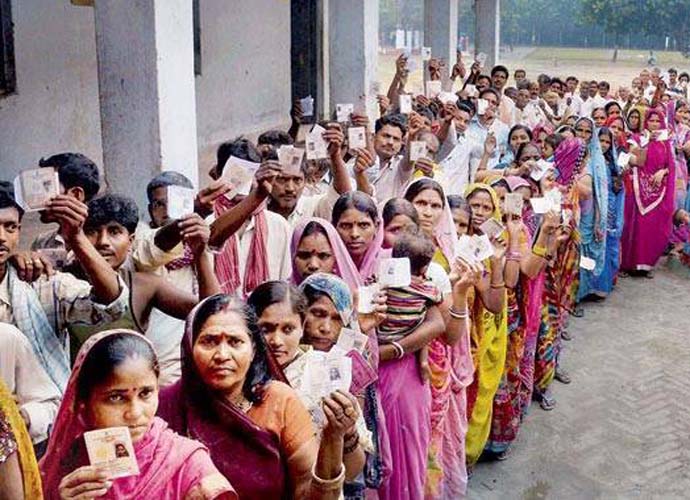 Moreover, elections in their most democratic framework, are the cornerstone of a democratic republic. Democracy is about electing our representatives to collective frame laws for self-governance. Republic is rule of the people. Elections - to the Lok Sabha and Vidhan Sabhas - are the fundamental method to uphold that very system that makes India a democratic republic, respecting its staggering diversity along so many axes. Citing expenses for elections means that next the public institutions that serve social justice, like the judiciary, or public universities, hospitals, public distribution system, will all be deemed too exorbitant. Already, equality is perceived to be a leftist lament.

What next? Democracy itself?

If elections are more expensive, it's because of political corruption that turns the universal franchise and the foundational principle of a democratic republic into an ugly spectacle of money and muscle power.

It was the 2014 Lok Sabha polls that was the most expensive elections ever recorded in India, with BJP having the lion's share of expenses, Congress a distant second. The glitz and glamour of elections are not at all integral to a process which is the vascular system that has the building block as the individual vote and the voter. The expenses argument is as spurious as the austerity argument of corporate tax cutting regimes reducing public spending in the name of fiscal prudence while writing off lakhs and crores of loan default and dishing out ever more salacious tax breaks to the filthy rich holding public policy to ransom.

Also read: How politics is fanning the communal flames in Kasganj