The Modi-Shah combine has tasted its first major defeat. But what they could do to counter this is truly scary

Rahul Gandhi has given the BJP major worries. To counter him, the right wing could now aggressively take up temple politics. But that spells doom for India's institutions.

If the December 11 results of Telangana and Mizoram are outliers, can the verdict from the three BJP-ruled states – Rajasthan, Madhya Pradesh and Chhattisgarh – suggest a pattern for India’s general elections of 2019?

If so, what options does it leave Prime Minister Narendra Modi with?

There is a clear and perceptible shift in the voter's mood away from the Bharatiya Janata Party. The BJP’s vote share has fallen sharply in Rajasthan, Madhya Pradesh and Chhattisgarh. This makes 65 Parliamentary seats – the BJP had won 62 of them in 2014 – vulnerable for Modi’s 2019 campaign. Not so blooming? There is a clear shift in the voters' mood away from the BJP. (Photo: PTI)

Identity politics and campaigns of hate did not make much headway — it was essentially about the economy.

Rural distress for the most part, and not a Ram Mandir in Ayodhya, was on the mind of most voters.

Also, given that these three states have been the BJP’s traditional strongholds, it is clear that the voters can’t always be outfoxed by party organisation, money and muscle. BJP president Amit Shah cannot always have the last laugh. Lastly, the message coming out of Tuesday’s verdict is that the BJP cannot expect to only depend on Modi. They might be running short of leaders.

But the biggest takeaway has been that Rahul Gandhi has arrived.

He has revived the moribund Congress party and decisively altered as well as bolstered the dynamics of a broader alliance to take on the National Democratic Alliance (NDA) in 2019.

When political messaging has taken center-stage and elections are increasingly turning into battles of perception, Tuesday’s verdict is possibly the worst that the Modi-Shah duo has faced since storming to power in 2014.

The question to ask, therefore, is what could be their game-plan to secure the party’s prospects in 2019? 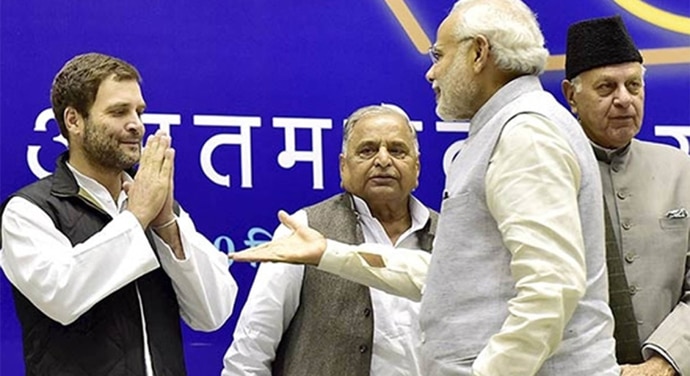 The biggest takeaway from the Assembly poll results is that Rahul Gandhi has arrived. (Photo: PTI)

Clearly, 'the economy' is no longer a viable electoral imagination that Modi and his party can hope to sell to the voters. Even if one accepts India’s GDP at face value, the numbers on paper actually become an ugly opposite on the ground. Farmers across the country are in deep distress. Demonetisation has wrecked the informal economy. GST is an implementation nightmare and jobs for India’s impatient demographic dividend are just not happening.

Social sector sops such as LPG cylinders for the rural poor – Ujjwala – and even the much-touted universal health scheme – Ayushman Bharat – have been undone either in the details or via extraneous factors such as the spike in international oil prices. There is no more talk about digital start-ups and the hoopla about Swachh Bharat, for example, is steadily being written off as a photo-op. In fact, the Modi government has been most compelling only at the level of organising the event.

The spectacular announcement of the scheme, with the Prime Minister often donning a flowing turban has, however, mostly died ingloriously on implementation, killed by administrative knots and poor governance. Clearly, boiling rhetoric and hot air do not make for workable policies. But the last four years have also been unprecedented in several other ways. Simply put, there has been substantial and unprecedented institutional damage. The functioning of prominent universities and places of learning has been grievously wounded with charges of anti-nationalism.

The ABVP and other affiliates of the ruling party have been allowed to run riot — silencing teachers, choking dissenting voices, aggressively imposing a very narrow and limited 'Hindutva' view of the world. One can add to this list, the Supreme Court, the Election Commission, the press, the RBI, even Bollywood. The latter, for example, was often forced to, comically enough, take a ‘patriotism’ test.

One of the most serious consequences, however, from rattling the foundations that hold up India’s democratic possibilities is the story of how the Modi-Shah combine have lost the ability to attract and sustain the best professional talent. The most recent case in point is the appointment of an associate professor from a newbie business school to the position of chief economic advisor (CEA) — while an MBA is definitely a business degree, it is certainly not a PhD in economics! Interestingly enough, both the two previous significant economists (NITI Aayog and the CEA) with the government chose to cut short their tenures for reasons of ‘family’.

Given the above decimation of the secular right-wing economic and social agenda, the only rabbit in the hat for Modi-Shah was pithily and chillingly expressed at the VHP rally on 9th December in Delhi: "Vikas nahin, mandir chahiye".

This could be read in two ways.

First, that for the VHP and the saffron right wing in India,  the spiritual is always greater than the material (something the British and the Western world always maintained about the Orient). Or, now that there has been no development, the temple is the only issue left for 2019.

And herein lies the real dilemma for the Modi-Shah dispensation. 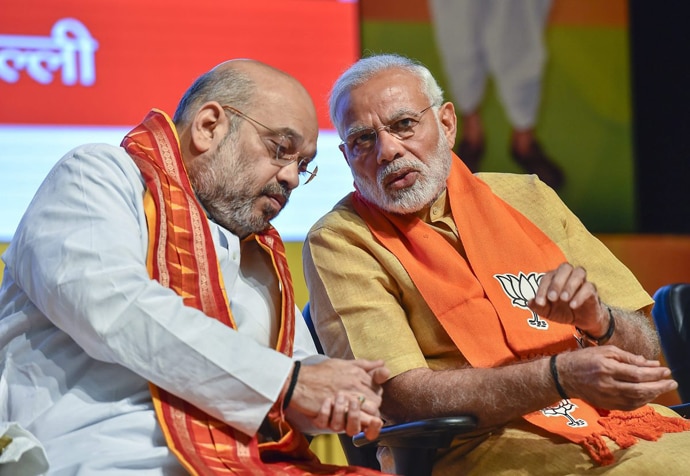 And on the howling heartless electoral battlefield of 2019, the Modi-Shah dispensation now finds itself in the middle, between these two rushing and opposing forces.

They now have to take sides and can no longer ride both horses as they did in 2014.

The stakes, however, this time around are different.  Given how the ‘mandir’ campaign is being set up, Modi-Shah have little choice in the matter if they embrace Hindutva. They will be compelled to drum up a bloody campaign for an entirely ‘New India’.

An India in which, through the course of the general elections, three major foundations will have to be overwhelmed in a single blow: the Ambedkarite Constitution, the Nehruvian secular institutions and the Gandhian democratic legacies of the freedom movement.

Is India ready for this leap — or will Modi-Shah blink?

#Assembly elections 2018, #Madhya Pradesh, #Rajasthan, #Chhattisgarh
The views and opinions expressed in this article are those of the authors and do not necessarily reflect the official policy or position of DailyO.in or the India Today Group. The writers are solely responsible for any claims arising out of the contents of this article.

The author is a journalist and commentator on policy and politics.